The Mil Mi-24 (NATO reporting name "Hind") is a large helicopter gunship and low-capacity troop transport designed by Mil Moscow Helicopter Plant in 1969, featuring a cockpit with a distinctive tandem "Double-Bubble" style canopy with the machine gun/auto-cannon in a "chin-gun" configuration. Many were sold to Warsaw Pact members or Soviet allies such as Poland, North Korea, Vietnam, etc. Its durability and heavy firepower combined with its low-capacity troop transport capability has cemented it as one of the most iconic and widely used helicopters in the world, with multiple modernization programs designed for the helicopter both by Russia and other third-party companies from different countries.

The Mi-35 Hind is an attack helicopter featured in Battlefield 2: Special Forces for use by the Russian Spetsnaz, Rebel Forces, and MEC Special Forces. Its USMC, MEC, PLA, SEALs/SAS, and EU counterparts are the AH-1Z Viper, the Mi-28 Havoc, the WZ-10, the AH-64 Apache, and the AS-665 Tiger, respectively.

The Mi-35's main role is to provide close air support for friendly forces, anti-armor, and denying enemy helicopters' operation. It has little capability against fixed-wing aircraft. The helicopter has 2 seats, one for its pilot, and the other for the gunner. Unlike its real life counterpart, it lacks troop transport capability in-game.

The pilot controls the flight of the helicopter, the UB-32-57 rocket pods, and the flare dispensers. The rocket pods contain 8 (14 before v1.2 patch) rockets, with acceptable blast radius and damge. The rockets are effective against infantry, light vehicles, APCs, and all types of aircraft, while taking more than a full barrage to destroy a main battle tank. Flares are used to break off enemy missiles and lock-ons, buying the player some precious time to escape or destroy the target, if possible. The flare dispensers have a recharge time of around 8 seconds, during which the vehicle is completely defenseless against heat-seeking missiles.

The gunner has control of the 12.7mm Yak-B machine gun and 9K114 Shturm anti-tank TV-guided missiles. The cannon has a good rate of fire, supplemented by its large magazine and unlimited reserve ammunition, however, it has a 0.227 second spin up time before it can be fired, so if the player want to keep it ready faster, they can repeatedly press the fire button to keep it spinning, but considering this delay is half of those of the AH-1Z and WZ-10, the player need not to worry much about this. The cannon can make short work of infantry, light vehicles, and even aircraft to a degree if they are on the ground. The TV missile, on the other hand, is extremely deadly to all types of vehicles, and it takes only 1 missile to destroy any vehicle. The missile also has a very good blast radius, even larger than those of the pilot's rockets, consequently dealing damage to all targets within 5 meters around the point of impact. And since it is manually guided, the player can use it against ground, sea, or even air target, provided the player is skillful and accurate enough, though this is very difficult, and couple with the missile's low speed, it is still not an effective countermeasure to already-airborne aircraft. However, the player can only fire 1 missile before having to wait 8 seconds for the missile to reload, and they are given only 8 missiles to start off with, meaning the player needs to use the weapon wisely to avoid wasting precious missiles and time. Also, new players may not be familiar with the weapon and may reduce its usefulness.

The vehicle, being a helicopter, can move forward, backward, strafe sideways, and hover in place, with the latter probably is its most useful ability. This allows the player to capture flags, or turning the helicopter into an accurate weapon platform to provide fire support. However, this also makes it more vulnerable to enemy fire, it is not recommended to stay too low in one spot for long, as the player will be an easy target for enemy tank shells, SACLOS missiles, or even TV missiles, all of which deal heavy damage, and anti-aircraft cannon and missile fire, all of which are devastating to the helicopter. The player also needs to bear in mind that the M95 can pierce through the glass of its cockpit, injuring or potentially killing the gunner/pilot. Also, the vehicle does not have any weapon to effectively counter fixed-wing aircraft once they are airborne, and combine with the speed disadvantage, the player should avoid confrontation with them at all cost.

All in all, the vehicle should be used for its intended purpose: provide CAS for friendly ground forces, suppress enemy armor on the battlefield, clearing out control points, and even as an observation platform to report enemy positions to the player's team. If necessary, the player may dogfight other attack helicopters, because they are similar in mobility and speed. With a good pilot and a good gunner, the Mi-35 is extremely devastating to enemy ground vehicles and infantry, and can effectively blunt an armored spearhead.

Compared to its counterparts, the Mi-35 is similar to the AH-1Z Viper and the WZ-10, being more oriented toward a general-purpose role, as its cannon is not as powerful as the Havoc's 2A42. The Mi-35 is arguably the largest attack helicopter in the game, so it presents itself as a bigger target, especially for manually guided missiles such as SRAW and BGM-71 TOW, an obvious disadvantage. It does, however, have the highest hitpoint value of any attack helicopter, at 1300 - 30% higher than its counterparts, while having the same critical health threshold, somewhat negating its large-sized disadvantage. Its cockpit doesn't provide as clear a view as the AH-1Z's but is less obstructed compared to other helicopters. Also due to its sitting layout, the chance of both the pilot and gunner getting injured/killed at the same time by the M95 or other weapons that can penetrate a helicopter's cockpit glass is basically zero.

The Mi-24 is a vehicle featured in Battlefield 2: Modern Combat as the main attack helicopter for the Middle Eastern Coalition in multiplayer. Its counterparts are the USMC AH-64D and the EU AS-665 Tiger.

The Mi-24 being chased by an AH-64D in Battlefield 2: Modern Combat.

The Mil Mi-24 Hind only appears in the singleplayer campaign of Battlefield: Bad Company. It has 2 variants: An AI-controlled one, painted in Russian military camouflage, and a gold-plated personal variant owned by Zavimir Serdar. The Mi-28N Havoc takes its role as an attack helicopter for the Russian Ground Forces in multiplayer.

The AI-controlled variant appears in most missions featuring the Russian/Serdaristanian military, save for Par For The Course and Air Force One. This variant is fully equipped with 4 B-8V20A 80mm rocket pods and 8 ZT-3 Ingwe ATGMs on the outermost pylons. In most instances where it physically appears in actual gameplay, it can be interacted with and shot down with any weapons, although rockets, HMGs, the ZU-23-2 when available, or even the LZ-537 are more preferable methods, since small arms will deal low damage and take a very long time to bring it down, and it takes only 1 rocket from the RPG-7 or M136 AT4, or 1 Paveway from the LZ-537, to destroy one. This variant is never available to the player.

The gold-plated variant is the only helicopter available for use in the singleplayer campaign in the mission Air Force One. Unlike the AI-controlled ones, this variant does not have the 8 ZT-3 ATGMs mounted on the outermost pylons. It has unlimited rockets that the player can fire at will and the rockets never overheat. The player can also switch to the gunner seat to take control of the 20mm cannon while Haggard keeps the helicopter in place. The cannon has a higher rate of fire compared to those of IFVs, along with much better accuracy, has unlimited ammunition, and it also never overheats and can be fired for as long as the player desires. The shells have a notably weak destructive power against structures/houses, taking up to 3 shots to blow open a hole on a wall, but it has a decent blast radius and immense distortion capability, since the player can literally reshape the terrain easily by the cannon, and is very deadly against enemy infantry, as well as light vehicles. The helicopter has decent maneuverability and can hover in place, which is very effective for consistent fire on a target considering the accuracy of the helicopter's weaponry, however it is not recommended to stay stationery close to the enemies for a long period, especially on Hard difficulty where enemies are faster, most accurate, and deal highest damage with their weapons, especially when going against enemies wielding RPG-7s, HMGs, the BMD-3 Bakhcha AAs, and Mark V Patrol Boats since their 23mm AA fire, or a combination of 20mm AA and rocket fire in the case of the Mark V, will make short work of the helicopter if not taken care of properly, and 1 rocket from the enemies' RPG-7s will destroy the helicopter.

The player also needs to avoid trees and all kind of poles at all cost, since they can deal medium - heavy damage to the helicopter depend on where they hit and how hard they hit the helicopter, and if a tree/pole touches the helicopter's main or tail rotor then the helicopter will be destroyed outright, no matter the difficulty, so the player needs to pay close attention to avoid hitting anything. If the player wishes to, one can use the vehicle's onboard weaponry and cut down all forests and poles, since the vehicle has unlimited ammunition, although this takes a lot of time. The player also needs to avoid the fuel tanks, since they can deal heavy damage, or destroy the helicopter right away if there are a lot of them close together like the ones at the harbor and refinery complex where the player attacks the supply trucks. Note that the relative ease to control the helicopter in the mission Air Force One can mislead players when using helicopters in multiplayer.

The Mi-24 in Battlefield Bad Company.

The view from the gunners seat.

"A large helicopter gunship operating as a flying infantry fighting vehicle, it performs both fire support and infantry transport missions. It has a crew of 2 and is capable of transporting 2 fully armed troops."

The Mil Mi-24 Hind is a vehicle featured in Battlefield: Bad Company 2 and is used more for its troop transport role than its attack role. It is the counterpart of the American UH-60 Black Hawk.

The Mi-24 Hind appears numerous times throughout the singleplayer campaign and functions in the exact same manner as in the multiplayer. One can be controlled in No One Gets Left Behind, after the player's team has made it to the helicopter base by Quad Bikes. However, the pilot's seat is not available to the player, and they can only man the cannon in the gunner's seat.

The Mi-24 can carry up to four players, with a pilot, a gunner, and two passengers who can fire off from the sides of the Hind. The helicopter is reasonably well armored, but can be damaged heavily when faced against enemies with RPGs and heavy machine guns.

The Hind flies more like an attack helicopter than the Black Hawk, being fairly sensitive to movement. Its chain gun fires in short bursts, and is heavily effective against infantry and light vehicles. It is essentially a cross between the Black Hawk (for its passenger seats) and the Havoc/Apache (for its chin mounted chain gun and maneuverability).

A Russian Soldier looking outside from a Mil Mi-24 Hind

Frontal view of the Mi-24 Hind. 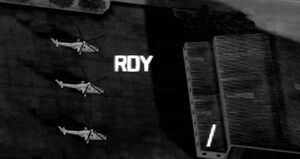 Numerous Mi-24 appear in Battlefield 3 on the mission Going Hunting as seen by Jennifer Hawkins from the Shark 4-6. It is never available to pilot by the player, both in singleplayer and multiplayer.