The Mi-8 (NATO reporting name "Hip") is a Soviet multi-role helicopter designed by Mil in the 1960s. Its main function is as a transport helicopter, but certain models can also be fitted with armament such as anti-tank rockets. It is the world's most produced helicopter. It was historically used by communist bloc states, such as Warsaw Pact nations, North Korea, North Vietnam, Yugoslavia, etc. though is today used by over 50 countries.

A derived variant, the Mi-17 was also developed and used for the Soviet War in Afghanistan. It was the basis for the Mi-24 Hind.

The Mi-8 Hip is a vehicle featured in Battlefield Vietnam as the primary transport and attack helicopter of the North Vietnamese Army.

The transport variant is a completely unarmed, high capacity mobile spawn point. It can carry six players: one pilot and five passengers in the rear hull, two of which are sitting out by the open rear hatch and can operate their personal weapons. it can't be commandeered by opposing forces.

The attack variant, however, allows the pilot control of four rocket pods, which can be fired with the primary (right) and secondary (left) fire buttons. Using one of the fire buttons will fire two rockets, and players can use both and send a volley of four rockets at once.

Each side has twenty rockets at their disposal, for a total of forty. Compared to other attack helicopters, the Mi-8 is particularly effective against armored vehicles, as a volley of four rockets can be enough to destroy even a main battle tank, granted the rockets hit their target.

The Mi-8 can be difficult for American and South Vietnamese forces to destroy, as they do not issue portable anti-air weapons, unlike the communist forces, which equip the SA-7. Players can try to find an enemy kit with an SA-7, though this may be difficult. However, with enough practice, it's possible to use a LAW, RPG-7, or RPG-2 to shoot it down.

It takes two hits with a rocket launcher to destroy an Mi-8. Hitting the tail fin causes the most damage, followed by a hit to the engine, and a hit to the body does the least damage. If a player hits an Mi-8 with full health once with a LAW or RPG, their rifle or machine gun can finish it off, although using a rifle requires several magazines.

An attack variant Mi-8 during the Fall of Lang Vei

Rear view of the attack variant

Rear view of the transport variant

The interior hull of a transport variant

A crashed Mi-8 in the jungles of the Vietnamese DMZ 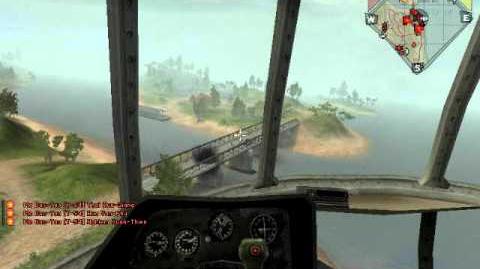 The Mi-17 is a vehicle featured in Battlefield 2 as the MEC's main transport helicopter. The Mi-17 can hold up to six players; the pilot, two door gunners and three passengers. It's counterparts are the USMC MH-60S Knight Hawk and the PLA Z-8.

Compared to MH-60S, its primary gunner weapons are rather weak, consisting of KORD machine guns, which are rather adequate to take out infantry and some lightly armored vehicles, but nowhere near to the same effect as that of the M134 Minigun on the MH-60S. The only advantage it gets is that its machineguns are ready to fire the moment you press the trigger, unlike the M134 which takes a second or two to spool in the minigun to fire. Mi-17 is also weak in handling, being rather too bulky and sluggish to turn and maneuver around compared to the MH-60s, not to mention its taller size can cause a higher probability that a guided anti tank missile such as the SRAW or any stationary AT missiles like BGM-71 TOW to score a hit on it.

Cockpit view of the Mi-8

Gunner view of the Mi-8

Hatch view of the Mi-8 from outside

Third person view of the Mi-8

The Mi-17 Hip is a vehicle featured in Battlefield Play4Free as the Russian transport helicopter. One spawns very often on the Russian Base and its American counterpart is the UH-60. It only appears on the map Oman.

Mi-17 in Battlefield Play4Free at Oman