The Middle Eastern Coalition (Arabic: تحالف الشرق الأوسط), commonly abbreviated to MEC, is a fictional military alliance of Middle Eastern states in the Battlefield universe. They have their standard armed forces, which appear in all maps concerning them in Battlefield 2 and Battlefield: Bad Company, and a special forces unit, which appear in all maps concerning the MEC in Battlefield 2: Special Forces. MEC weapons are largely based on advanced Russian military technologies. Most of the MEC campaigns are based around oil fields and desert combat.

In Battlefield 2, the MEC fight against the United States Marine Corps and the European Union alongside the People's Liberation Army. They are armed with a mixture of foreign equipment, most of which being of Russian origin.

The MEC is a military alliance of Arabic-speaking nations situated in the Middle East. It is unknown which Middle Eastern states were members of the Coalition at the time of Battlefield 2. However, locations mentioned as being under MEC control include, but are not limited to, areas in the Arabian Peninsula, Kuwait, Lebanon, Oman, Qatar, and Syria.

The MEC's weapons and equipment are almost purely Russian in origin. Their vehicles and weapons are almost all Russian made, with the exception of the ERYX, which is European.

The only mentioned unit within the MEC is the MEC Second Armored, and is the belligerent force in Operation Harvest. They were one of the units which took part in the invasion of the United States, and are mentioned to have been attempting to cut the District of Columbia off from support.

As stated above, the MEC forces use a variety of weapons from Russia, as well as equipment used by the Europeans. The MEC predominantly wear desert camouflage uniforms. Kits with body armor wear helmets, the Medic/Engineer kits wear beanies, the Special Forces kit wears a green beret, and the Sniper kit wears a ghillie suit.

The MEC use a mixture of vehicles from different nations, Mostly Russia and China.

In Battlefield 2: Modern Combat, the MEC makes its only appearances in the multiplayer aspect. As in Battlefield 2, the MEC's forces always engage the United States Marine Corps, in predominantly desert-type maps in the Middle East. The MEC's equipment and vehicles are mostly Russian in origin -- just as in Battlefield 2 -- however, their equipment tends to be older and less advanced compared to what they used in Battlefield 2.

Unlike in Battlefield 2, the MEC armament consists of older weapons and gear is less advanced.

Like in Battlefield 2, the MEC uses mainly Russian-made vehicles, though Chinese and Turkish made vehicles are present. It also uses modified civilian vehicles.

MEC soldiers in Battlefield: Bad Company; a Specialist with a 9A-91 and a Support unit with a QJU-88.

An MEC Black Eagle engaging an AH-64 Apache from the 222nd Army Battalion.

The original MEC flag. Note the picture is extremely rare. 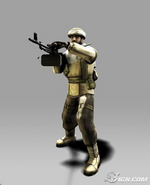 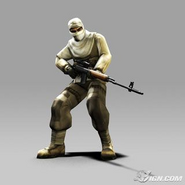 MEC Sniper with an SVD from Modern Combat.

MEC Engineer with an AKS-74U carbine from Modern Combat.

Another rare screenshot of an early MEC soldier model.

The MEC flag as seen in the spawn menu in Battlefield 2: Modern Combat.

Another version of the MEC flag from Battlefield 2: Modern Combat.

A variant of the MEC flag from Battlefield 2: Modern Combat. 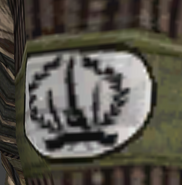 The arm banner on all Battlefield 2 MEC soldiers' left arm, where the Modern Combat flag came from. 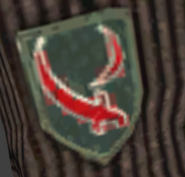 Another patch on all MEC soldiers' right arm.

Another possible early design for the MEC flag in Battlefield 2, as seen from the texture file of the MEC pilot.