Minsk is a map featured in Battlefield 2142.

"The Cold War began in October 2139 with coordinated PAC invasions from the Persian Gulf to the Baltic Sea. In November, as part of Operation Canute, three battalions led by General Arkadi Petrov entered Minsk, a key EU command center in Northern Europe. The EU's Krieg Panzer 2nd Regiment fiercely defended the city for over four months until the PAC's elite Central Command Group broke through their southern flank, forcing them to withdraw. The Battle of Minsk featured the first frontline use of the militarized Titan, forever altering the character of modern warfare."

A forward base slightly offset north of the axis from Front Line. PAC vehicles must cross mostly open field to reach the trenches.

In 16-player Conquest, the PAC assault force is supported by a tank, two APCs, and an FAV. A railgun is set up for defense. Titan mode gives two tanks, an APC, two FAVs, and a railgun. 32-player mode adds a gunship and AA gun. 64-player mode instead adds a third tank.

A covered trench network supported by a lookout post.

In all Conquest variants, the PAC has two additional infantry spawns at the ends of each trench line.

In 16-player Conquest, the flag is supported by a battlewalker and two FAVs. For 32-player mode, an FAV is replaced with an APC, and two railguns and an AA gun are added. 64-player mode is again supported with a second FAV. Titan mode supplies a tank, APC, FAV, AA gun, and railgun.

Hill provides one each of a battlewalker, fast attack vehicle, railgun, and anti-air gun. On 32-player Conquest, a tank will also spawn when held by the EU team. On 64-player mode, the tank spawn is no longer team-bound, and another FAV is available.

A third position with fortified trenches and a pair of lookouts. Heavy armor will spawn from dugouts behind the trenches. Ground vehicles may take either of two bridges across the trench, or unworked areas around the trench. A dry ravine leads towards Monument Outpost, and a lightly forested area towards Front Line.

In 16-player Conquest, a pair of FAVs and a railgun spawn. 32-player Conquest provides a tank, APC, two FAVs, two railguns, and an anti-aircraft gun. 64-player Conquest replaces the APC with a second tank. In Titan mode, a tank, FAV, railgun, and AA gun spawn.

One of three building complexes on the map, and one of two available in the large game modes. Eight buildings are arranged in an arc around a central plaza, in ascending order with the two tallest buildings having spires. Accessible in some modes, the roofs offer no appreciable cover, and do not allow travel between them except via air vehicles. They do offer excellent view of the plaza area, and even the ravine from South Outpost. The westernmost can even see towards Front Line, fog and draw distance permitting.

At ground level, a helipad, some small buildings and a fence break up the otherwise circular grounds around the plaza. There is just enough roundness in elevation to prevent those in the center of the plaza from seeing anyone at the edge of the grounds. The plaza has some low cover and a sculpture. Players can also maneuver between and behind the buildings

One of two control points added in 64-player Conquest, and site of Silo 5 in Titan mode. A series of yards with low walls, each with the remains of a house.

In 64-player Conquest, three FAVs and two railguns spawn here. In Titan mode, a tank, FAV, APC, railgun, and AA gun appear here instead, along with an opened pathway down to Hill.

Rows of hedgehogs meant to obstruct ground vehicles on the path from Monument Compound to EU headquarters. The steep terrain hinders other attempts to climb uphill, save for a path towards Ghost Town. The slope is even dangerous to battlewalkers attempting to go downhill.

A second complex of buildings similar to those at Monument Compound. EU assets are clustered on the west side of the plaza, leaving the east half open.

In Titan mode, two tanks, an APC, an FAV, and a railgun spawn below the Titan.

Titans loom over the skyscrapers of Minsk in this gamemode. The map expands upon the 64-player mode by adding a side road from Hill to Ghost Town, and using all flags except for Roadblock as silo locations.

From their default positions, the EU Titan can reach the roofs of the Monument Compound complex overlooking Silo 4, while the PAC Titan can reach just outside of Silo 2 at Hill. The PAC Titan has an excellent ground position, accessible only through Front Line, and clear view of the area to the north. Meanwhile, the EU Titan has a lot of accessible ground around it, and many hiding places for APCs to launch pods.

The helipads at EU Headquarters, Monument Compound, and PAC Camp still support air vehicles, even though they do not spawn any.

Medium mode for 32 players adds the Hill flag. Each team also gains access to a gunship at their respective base. AA guns appear at all flags.

Large mode adds the Roadblock and Ghost Town flags, and moves the base to EU Headquarters. 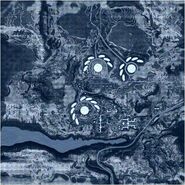