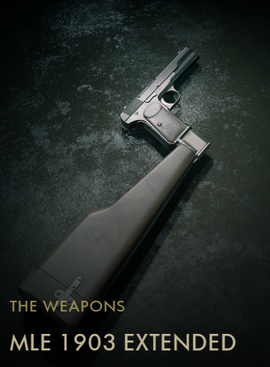 The Model 1903 was a semi-automatic handgun. Operating with a blowback mechanism, it fired 9x20mm cartridges from a self loading 7 round box magazine inside the pistol grip. Popular among police forces because of its light weight and the accuracy provided by its detachable shoulder stock, the Model 1903 was primarily shipped to the Ottoman Empire and Russian Empire before the war broke out. The Belgian factory was occupied by German troops in August 1914.

Retrieved from "https://battlefield.fandom.com/wiki/Mle_1903_Extended_(Codex_Entry)?oldid=343264"
Community content is available under CC-BY-SA unless otherwise noted.