The MLE 1903 is a Codex Entry featured in Battlefield 1. It is unlocked upon obtaining ten kills with the Mle 1903. 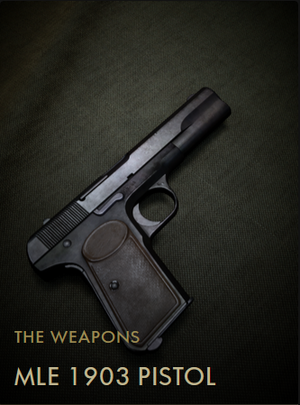 Designed in the USA in 1902 and first manufactured in Belgium, the Mle 1903 Pistol is in many ways the forerunner of modern semi-automatic pistols with features such as a large slide, quick reloading through a box magazine in the grip, and a light weight.

The Mle 1903 was essentially a scaled-up version of the 1903 Pocket Hammerless Pistol to cope with a larger and more powerful 9mm round, making the Mle 1903 more attractive for the military and police. It did also become very popular with the armies and law enforcement of many nations, including the Ottoman Empire, Russian Empire, the UK, Belgium, Spain, Sweden, and Finland. The Mle 1903 was also produced under contract in Sweden, and between Belgium and Sweden about 150,000 of them were produced.

The Belgian production of the pistol was discontinued when German forces overran the factory in 1914. The Russian police contracts for the Mle 1903 included shoulder stocks, which was very common for pistols at the time, and an extended 10-round magazine to allow the shoulder stock to be fitted to the pistol. The Mle 1903 was reliable, accurate, comfortable and quick, and it went on to see action in WW2. The fact that many of them are still in circulation today is a testament to their ruggedness.

Retrieved from "https://battlefield.fandom.com/wiki/Mle_1903_Pistol_(Codex_Entry)?oldid=343148"
Community content is available under CC-BY-SA unless otherwise noted.