The Model 10 Shotgun is a Codex Entry featured in Battlefield 1. It is unlocked upon obtaining 10 kills with the Model 10-A. 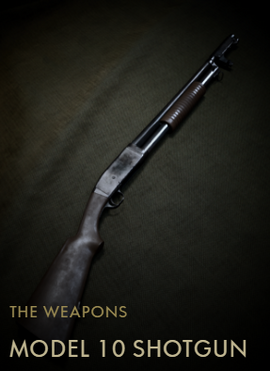 A lesser known shotgun used by US troops in WW1 was the Model 10 pump-action shotgun. Originally a sporting shotgun, the US Army order a militarized version of the Model 10 to shore up the lack of the more well-known M1897 shotguns.

The civilian Model 10 was adapted with a distinctive wooden heat shield over the barrel as well as a bayonet lug and sling swivels for a shoulder strap. The bayonet lug was designed to accept the same M1917 bayonet already adopted by the military. 3500 Model 10 Trench Guns were used by the US Army in WW1. While it had a lesser impact militarily, it was a commercial success, with production running from 1908 to 1929.

Retrieved from "https://battlefield.fandom.com/wiki/Model_10_Shotgun_(Codex_Entry)?oldid=343122"
Community content is available under CC-BY-SA unless otherwise noted.