Model 1900 is a Codex Entry featured in Battlefield 1, introduced in the Battlefield 1: In the Name of the Tsar expansion. It is unlocked upon obtaining ten kills with the Model 1900. 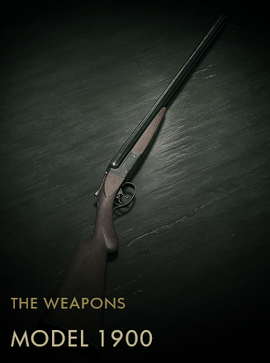 The Model 1900 was a simplified, cheaper version of the preceding Model 1894 break-action, double-barreled shotgun. The Model 1900 was built on the same patents as the 1894, but was not available with engravings, and was sold alongside the older model. Close to 100,000 of the Model 1900 shotguns were produced between 1900 and 1910, when the manufacturer felt that the future laid with autoloading shotguns like the Model 11 and pump-action shotguns like the Model 10, and sold-off their remaining inventory of break-action shotguns. Most of the belligerents in WW1 used hunting shotguns in a more or less official capacity, often for sentry duty. In Russia, weapons of virtually all types and manufacture were sold freely in hunting shops before the 1917 Revolution, and most people in rural areas had a rifle or shotgun in their homes. Due to the acute “rifle hunger” in the Russian Army for a large part of the war, one of the recommendations was; “to adapt to the needs of the army all shotguns in Russia must be available for firing buckshot at the Enemy”.

Retrieved from "https://battlefield.fandom.com/wiki/Model_1900_(Codex_Entry)?oldid=343218"
Community content is available under CC-BY-SA unless otherwise noted.