Short
"Classic American shotgun, Modular Combat Shotgun version. As the name implies, it allows the user to configure the weapon into different setups. "

The 870MCS is a weapon featured in Battlefield: Bad Company.

The 870MCS can be found in a few missions. It is the weapon that Haggard always uses other than his M136 AT4.

The 870MCS is the default shotgun issued to the American Demolition kit and has an 8-shell capacity. Like all pump-action shotguns, it is very powerful, being highly capable of killing in a single shot, but its efficiency deteriorates quickly at longer ranges.

It is also limited to a low rate of fire, requiring the user to pump every shot. When possible though, the 870MCS might be preferable over other pump action shotguns due to its faster pumping action and therefore rate of fire.

The 870MCS in Battlefield: Bad Company in the multiplayer Valley Run

The 870MCS being aimed
Add a photo to this gallery

Long
"The ideal weapon for the patient accuracy focused Hero. High base damage more than makes up for this weapons lack of critical hits"

The 870-MCS is a weapon featured in Battlefield Heroes for the National Army. It was introduced in March 2011 in the Punk Heroes bundle. Its counterpart is the 590 Assault Shotgun for the Royal Army.

[1]
"The 870 Modular Combat Shotgun is a powerful shotgun ideal in close quarters battle where breaching and stopping power is critical. It can be configured for multi-mission roles with various ammunition combinations."

The 870 Combat is a weapon featured in the multiplayer of Battlefield: Bad Company 2.

It is the first shotgun available to the player, unlocked once the player reaches rank 1. Its buckshot pellets provides effective close range firepower, usually resulting in a 1-shot kill at very close range, though its performance quickly deteriorates at longer ranges.

It has a default capacity of 4 shells, and increased range. If used with the Extended Shotgun Magazine, it can hold 8 shells, making it much more effective in large scale combat. It can also use the 12 Gauge Slugs for it to fire single long range projectiles, where it can kill in a single headshot at all ranges.

It is possible to reload cancel, but this is less effective then it would be with the NeoStead 2000, reload canceling after a shot, by switching to an other weapon, will effectively cut the pump animation and double your fire rate, some practice is needed though.

The zoomed in view of the 870 Combat.

The 870 Combat in first-person view. 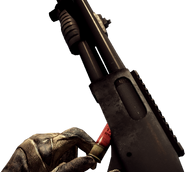 The 870 Combat at Nelson Bay in Rush.

The 870 Combat in Battlefield: Bad Company 2 iOS.
Add a photo to this gallery

[2]
"The 870 Modular Combat Shotgun is a powerful shotgun ideal in close quarters battle where breaching and stopping power is critical. It can be configured for multi-mission roles with various ammunition combinations."

The 870 Combat is a weapon featured in the Battlefield: Bad Company 2: Vietnam expansion as an all-kit weapon. It performs similarly to the 870 Combat in the base game, but it has higher damage up close.

Like in the base game, it has a default capacity of four shells and can be modified with the Extended Shotgun Magazine to have eight shells, and/or 12 Gauge Slugs to fire single long range projectiles.

Unlike in the base game, the 870 is the Vietnam expansion's only shotgun, and as such fills an anti-personnel role at close range that cannot be compared to any other weapon available in the expansion.

The zoomed view of the 870 Combat. 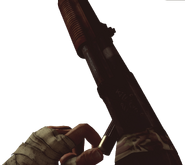 An American soldier armed with a 870 Combat on promotional art of the Vietnam expansion.

The furthest an enemy can be for the 870 Combat to do its maximum damage with 12 Gauge Slugs at 10m.

The closest an enemy can be for the 870 combat to do its minimum damage with 12 Gauge Slugs at 36m. 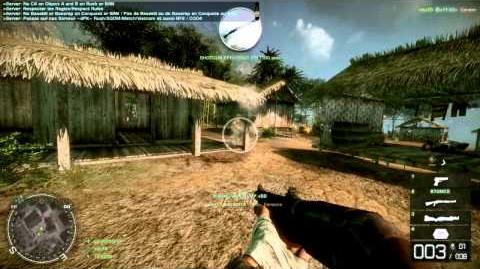 BFBC2 Vietnam Honor The Remington 870
Montage of the 870 Combat in Battlefield: Bad Company 2: Vietnam
Add a photo to this gallery

for unlimited use or 400

It comes with an 8-round tube magazine and provides effective close range firepower, usually resulting in a 1-shot kill at very close range, though its performance quickly deteriorates at longer ranges. It also has usable iron sights and does actually exactly the same damage as the standard SPAS-12 with the same rate of fire, but costs less than the latter, lending to personal preference between these guns.

The 870 Combat BF3 Edition was given to players who pre-ordered Battlefield 3 through the EA Store. It is statistically identical, but has a different visual finish.

The 870 Combat in Battlefield Play4Free.

High Quality render of the 870 Combat. 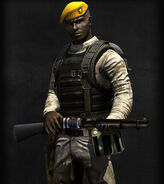 870 Combat BF3 edition
Add a photo to this gallery

http://symthic.com/?s=bf3
http://www.ign.com/wikis/battlefield-3/870MCS
"The M870 is an American made Pump-Action Shotgun that has been used by Special Forces units for decades. In urban environments the M870 is especially effective due to its high stopping power at close range. The ability to load different types of shells makes the M870 able to adapt to a wide variety of situations, while a narrow choke gives the M870 slightly more range than other shotguns."

The 870MCS is a weapon featured in Battlefield 3.

The 870MCS is used by the USMC, and the PLR forces. The shotgun is also one of the default weapons in Operation Guillotine. The National Police can be seen using the 870MCS in Comrades.

The 870MCS is the first shotgun available to players in multiplayer, since it is already accessible at level one. It has the highest damage and longest range of all the shotguns in the game, however the SPAS-12 has a tighter spread allowing for more consistent longer range shots.

Even for a pump-action weapon, the rate of fire of the 870MCS is quick enough to fire follow-up shots much faster than Battlefield: Bad Company 2's version. Sporting a 5-shell capacity (one in the chamber and four in the tube magazine), it can kill with a single shot at close range, or two to three shots at medium range.

Sights/optics (such as the Reflex, and rifle scope) and ammo (12G Slug, 12G Frag, and 12G Flechette) replacements can also be unlocked for this shotgun.

The use of extended magazines changes the visual appearance of the 870MCS. As with most weapons, reloading takes much longer if the player does not have a shell chambered already. The 870MCS does have the advantage of being able to fire while reloading.

The 870MCS on Operation Firestorm.

The 870 MCS is a weapon featured in Battlefield 4.

The 870 MCS is unlocked by completing the Bronze assignment in Suez by scoring 3,000 points. It is equipped with Iron Sights, no accessories, Compensator and 12 Gauge Buckshot. It features a Worm Woodland finish.

It is the second shotgun unlocked, after the QBS-09, requiring 4000 Shotgun Score to unlock. It shoots 12 pellets, thus being the second highest damaging shotgun after the Hawk 12G, which shoots 14 pellets. It is a pump-action shotgun and has a 7 + 1 capacity. It unlocks the US attachments, while the Russian and Chinese attachments can be attained through Battlepacks.

8 + 8 shells (SP)
"The nickel-plated 870P is a durable pump-action shotgun that holds 7 shells in its magazine tube. Well-rounded and versatile over range, the 870P can be counted on in a tight spot."

The 870P Magnum is a weapon featured in Battlefield Hardline. It is the default weapon issued to Enforcer kit for both factions. It is equipped by default with a Tactical Light.

870P Magnum
Add a photo to this gallery

Retrieved from "https://battlefield.fandom.com/wiki/Model_870?oldid=368602"
Community content is available under CC-BY-SA unless otherwise noted.