The Model 8 Autoloading is a Codex Entry featured in Battlefield 1. It is unlocked upon obtaining ten kills with the Autoloading 8. 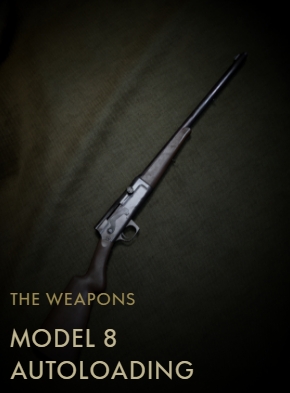 Patented in 1900 and eventually being sold as the Model 8 Autoloading rifle in 1906, the Model 8 was one of the earliest semi-automatic rifles on the market. Produced in both the US and Belgium, it was primarily intended as a hunting rifle, but particularly in Europe, it was hard to convince hunters to spend money on a novel and expensive rifle.

The Model 8 used a long recoil operating system, which worked well for hunting but was prone to overheating and malfunctions with high volumes of fire. It did however build a reputation as a reliable and durable hunter's weapon. The Model 8 also saw service as a police gun using a detachable extended magazine.

About 100 Model 8 rifles were sold to France in 1915 and used as aircraft rifles before the advent of aircraft machine guns. The weapons was also used during the Irish Easter Rising of 1916, as well as the Russian Civil War after WW1.

Retrieved from "https://battlefield.fandom.com/wiki/Model_8_Autoloading_(Codex_Entry)?oldid=343124"
Community content is available under CC-BY-SA unless otherwise noted.