Modern Marvels is a Codex Entry featured in Battlefield 1. It is unlocked by obtaining one Avenger kill in multiplayer. 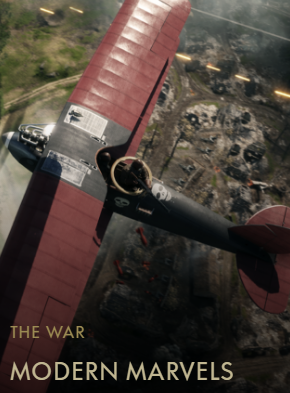 No other war in history had brought such change so quickly as World War One. It's been said that between 1914 and 1918 the world went from 1870 to 1940, and in many ways it is true. Men rode into the war on horses and rode out of it in tanks. In August 1914, old school met new as infantry marched out en masse in brightly colored uniforms against machine guns. The new school won.

Airships and airplanes sailed the skies, submarines and battleships prowled the seas, and the biggest guns of all- the Paris guns- fired shells that were the first man-made objects to reach the stratosphere. Stormtroopers, the creeping barrage, chemical warfare, the psychological warfare of bombing civilians far from the front, these were the hallmarks of the First World War. Even things we take for granted today like the zipper, radio communication, sanitary napkins, and soy sausages became everyday conveniences because of the war, and medicine made greater progress in those four years than at any time before or after.

As the victors redrew the map after the war many countries we know today emerged. The postwar world was in every respect, a new world.

Retrieved from "https://battlefield.fandom.com/wiki/Modern_Marvels_(Codex_Entry)?oldid=343315"
Community content is available under CC-BY-SA unless otherwise noted.