The Mondragón is a Codex Entry featured in Battlefield 1. It is unlocked upon obtaining ten kills with the Mondragón. 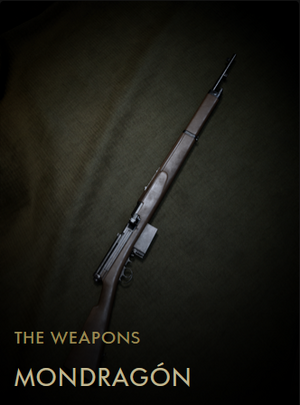 In 1908, the Mexican army was the first one in the world to officially adopt a semi-automatic rifle. The weapon was the Mondragón rifle, a gas-operated weapon patented the year before by a Mexican General.

Since Mexico did not have the manufacturing capabilities to produce large batches of the Mondragón rifle, orders were instead issued to a Swiss manufacturer. However, because of political instability in Mexico at the time, only about 400 of the ordered rifles had been delivered to the Mexican army by 1910. They later canceled the order due primarily to high manufacturing costs. Instead, the German Army bought the remaining Swiss stocks of Mondragón rifles at the start of WW1.

Some of the rifles were issued to German infantry, but like most self-loading rifles at the time it proved highly sensitive to dirt. Most of the Mondragóns were instead assigned to the German air force and equipped with extended 20- or 30-round magazines, where they could perform decently in the clean conditions of the air. The Mondragóns were gradually replaced by aircraft machine guns as the war progressed.

Retrieved from "https://battlefield.fandom.com/wiki/Mondrag%C3%B3n_(Codex_Entry)?oldid=343127"
Community content is available under CC-BY-SA unless otherwise noted.