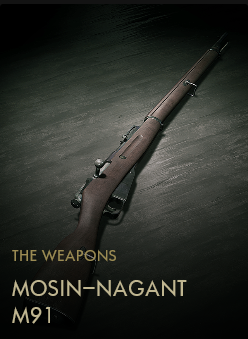 The Russian Mosin-Nagant M91 rifle is one of the longest serving and most produced military rifles in history, with over 37 million units built. During the Russo-Ottoman war of 1877-78, Russian troops armed with single-shot Berdan rifles suffered heavy casualties when facing the Turkish troops armed with repeating lever-action rifles. This led to the realization that Russia needed to upgrade to a modern repeating rifle, and over the following years a large number of different guns were acquired for testing – among others the revolutionary French Lebel 1886 with its smokeless cartridge. In 1889, by the order of Tsar Nicolas, a government rifle commission was assigned to develop the new rifle, and the same year three different models were submitted for evaluation; Imperial Army Captain Sergei Ivanovich Mosin’s 7.62mm rifle, Belgian designer Léon Nagant’s 9mm design and another 7.62mm rifle from Captain Zinoviev. In the end the commission decided to incorporate features from both Mosin and Nagant, and in 1891 the new weapon was officially adopted for service by the Tsar, by the name of “three-line rifle, system 1891”. A “line” is a unit of measure equal to 1/10th of an inch, meaning 7.62mm. The M91 was relatively modern at its introduction, featuring a five round internal magazine and bolt-action. It fired a new rimmed cartridge, which at the time of its adoption already started to become obsolete – but the rimmed case allowed much greater chamber dimension tolerances, which worked well together with the lower standard of Russian manufacturing. Overall the M91 rifle was designed to be as reliable and simple to manufacture as possible, and became part of the image of rugged and dependable Russian small arms. The Mosin-Nagant in different variations was the standard rifle of the Imperial- and later Soviet Russian army for about 60 years, being produced in Russia until 1948. It also saw service with China, Finland, Bulgaria, Poland, Vietnam, North Korea and many others – as well as being captured and used in large numbers by German and Austro-Hungarian forces during WW1. Two American companies were contracted to produce over 3 million M91’s in 1916-17, but the delivery of these was stopped after the 1917 Revolution. The remaining 280,000 rifles were instead purchased by the US Army and issued to the American and British expeditionary forces in northern Russia during the Civil War, as well as being used for training of US troops, and later being sold to civilians before WW2. Already in 1906, Russia started experiments with adapting telescopic sights to the M91, relying on German optics manufacturers with subsidiaries in Russia, but during WW1 these kinds of sniper rifles were still rare. More common was the use of periscope sights and mounts for the M91, which allowed it to be fired over the edge of a trench, but the weapon had to be lowered after each shot to cycle the bolt.

Retrieved from "https://battlefield.fandom.com/wiki/Mosin-Nagant_M91_(Codex_Entry)?oldid=343229"
Community content is available under CC-BY-SA unless otherwise noted.