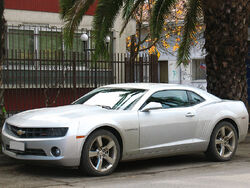 Muscle Car is a term used to refer to a variety of high-performance automobiles, and generally refers to two-door American coupes with large V8 engines.

The Muscle Car is a light vehicle introduced in the Battlefield 2: Armored Fury expansion. It appears on Midnight Sun on every map size, and is also present on the 16-player variant of Operation Road Rage.

The vehicle is similar to the HMMWV, NJ 2046, and GAZ-3937 Vodnik in regards to speed and handling, but it does not have any mounted weapons and is much less durable. The driver and passenger cannot use any weapons while in the vehicle.

The Muscle Car is a vehicle in Battlefield Hardline. It serves as the Criminal Coupe, being slightly faster and more maneuverable than the Sports Sedan, but can only seat two players (one driver and one passenger) compared to the Sedan's four. The passenger is able to either shoot through the windshield or hang out of the side window and fire. It is a direct equivalent to the Law Enforcement Police Interceptor.

In singleplayer campaign, Muscle cars car vary in color, including blue, red, yellow and gray. In Out of Business, The Korean mafia’s muscle car color can be seen in gray, red and yellow.