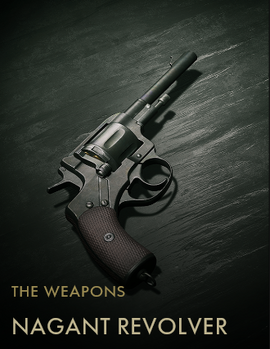 The Nagant M1895 revolver is arguably one of the most well-known handguns in the world. In 1891 the Imperial Russian Army adopted the equally famous Mosin-Nagant service rifle, incorporating design features of the Belgian weapon designer Léon Nagant, which had made Léon and his brother Émile well-known in Russian Tsarist and military circles. After the adoption of the Mosin-Nagant rifle, the Tsar requested a modern sidearm for officers and troops, and in 1895 the Russian army adopted the Nagant brothers’ revolver. In a twist of fate, seven of the Nagant revolvers would be used to murder the Tsar and his family in 1918. Designed between the late 1880’s and early 1890’s, the Nagant revolver is virtually unique in that it utilizes a gas-tight seal. Most revolvers have a small gap between the cylinder and the barrel, allowing the cylinder to rotate, leading to some of the propellant gases escaping through the gap and lowering the muzzle velocity. The cylinder of the M1895 instead slides forward a little upon cocking, sealing the cylinder against the barrel forcing cone. The gun also uses a proprietary 7.62x38mmR cartridge, with the bullet enclosed inside the casing, and a crimp just above the bullet which expands into the forcing cone upon firing. These two features of the M1895 extracts the maximum energy from the propellant gases, increasing the muzzle velocity to 891 ft/s (272 m/s). The gas-tight seal also allowed a sound suppressor to be mounted, which is unusual for revolvers. The biggest downside of this design is that each cartridge has to be loaded and extracted one by one through a loading gate – making the M1895 slower to reload than many contemporary break-action revolvers, which could use speed-loaders and eject all spent cases at once. Still, the Nagant Revolver served extensively with the Russians through and beyond WW1 and was highly appreciated for its extreme sturdiness and dependability. Even as more modern pistols like the T33 appered alongside it, the M1895 kept serving, with over 2 million built when production finally ceased ca 1950. Many other nations also used the Nagant revolver, like Belgium, Kazakhstan, Sweden, Norway, Poland, Yugoslavia and Ukraine. After WW2 it kept on being used in the Chinese Civil War, the Korean War and the Vietnam War - with some security forces still being equipped with the Nagant M1895 well into the 21st century.

Retrieved from "https://battlefield.fandom.com/wiki/Nagant_Revolver_(Codex_Entry)?oldid=343217"
Community content is available under CC-BY-SA unless otherwise noted.