A Nail Gun is a type of tool used to drive nails into wood or some other kind of material. It is usually driven by electromagnetism, compressed air, highly flammable gases such as butane or propane, or, for powder-actuated tools, a small explosive charge. The first nail gun used air pressure and was introduced to the market in 1950 to speed the construction of housing floor sheathing and sub-floors. With the original nail gun, the operator used it while standing and could nail 40-60 nails a minute. It had a capacity of 400-600 nails.

In the United States alone, thousands of people are injured a year from nail guns. Due to safety concerns, precautions are taken in a similar manner to firearms. As such, nail guns are designed to be used with the muzzle touching the target rather than from a distance. Unless specifically modified, they are not an effective projectile weapon.[1]

"There are times when a weapon has to be improvised. The Nail Gun is a great example of this. It doesn’t use conventional ammo or have any optics, but it can get the job done"

The Nail Gun is a Battle Pickup featured in Battlefield Hardline: Criminal Activity.[2] The nail gun has a high rate of fire and a high damage output only in close quarters, with players able to obtain a one-hit kill with one shot to the head with the weapon. With a capacity of 10 nails, it functions similarly to a handgun in close quarters, though it has high "bullet" drop. Fired nails will appear as blue tracers. The Nail Gun also does not create much sound when fired, being invisible to enemy players on the minimap.[3] 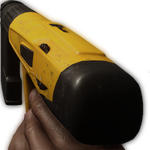 The Nail Gun in first person