Naval Cutlass is a Codex Entry featured in Battlefield 1, introduced in the Turning Tides expansion. It is unlocked upon obtaining 10 kills with the Naval Cutlass. 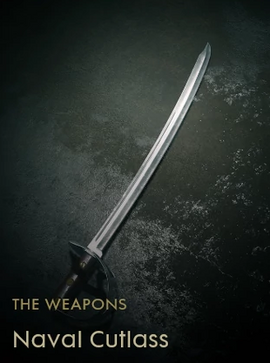 The cutlass was the iconic sword of the seaman, and was used by navies for centuries, intended for boarding and close quarters fighting on ships. It was typically a short and broad sabre with a curved blade and a solid cupped guard at the hilt.

During WW1, most navies were still doing doutine fencing drills with the cutlass, and there are many records of its use during the war. During the Battle of Dover Strait in 1917, the British Destryoer Swift rammed the German Torpedo Boat G42 and the two ships became locked together, and close quarters fighting with cutlasses and other weapons erupted as the German sailors tried to board the Swift. There are also several mentions of both German and British troops wielding cutlasses in hand to hand fighting during the 1918 Zeebrugge Raid.

Retrieved from "https://battlefield.fandom.com/wiki/Naval_Cutlass_(Codex_Entry)?oldid=343242"
Community content is available under CC-BY-SA unless otherwise noted.