The Naval Warfare is a Codex Entry featured in Battlefield 1. It is unlocked upon destroying an enemy Behemoth. 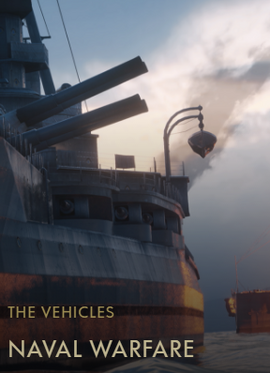 Throughout the war, the navies of the warring nations encountered each other in a variety of scenarios all over the world's seas, and naval warfare was a war of technology and training, where precision and speed ultimately decided the outcome of the battle. Fought over great distances, range finders and optical equipment had to be expertly used to calibrate the big guns. Admirals would direct ships of different speeds, firepower, and range into optimal positions while judging the strategy of the enemy.

The Adriatic Sea saw the dominance of small but agile torpedo boats, while submarines hunted unwary merchant ships in the North Sea. All navies feared the power of a single well-placed torpedo. Cheaply built and easily deployed, they were able to land a decisive blow against a more powerful enemy, if they could just get close enough. Far away in the Pacific, lone German raiders escaped allied patrols over and over again, wreaking havoc on merchant shipping and attacking undefended coastal ports. Elsewhere, minelayers silently cruised through the night, deploying their deadly traps. In the narrow straits around the Dardanelles, the Black Seas, and the Levant, ships fell prey to the deadly explosives that lurked beneath the surface.

Retrieved from "https://battlefield.fandom.com/wiki/Naval_Warfare_(Codex_Entry)?oldid=343278"
Community content is available under CC-BY-SA unless otherwise noted.