Born and raised in Mumbai, Navin Rao suffered from a debilitating illness as a teenager. While bedridden, Rao studied electronics and engineering. He later fell in with a hacker community where he learned coding, friendship, and teamwork. Feeling that he now had a future, he recieved mobey from his Aunt Sanah when he was thirteen and used it upgrade his internet as it was not a priority for his father. Once recovered, he was determined to utilize his skills to support his country by joining the Indian Navy at the age of 21. He was later selected to become an officer for the elite Navy Marine Commando Unit (MARCOS).

While assigned to secure Non-Patriated refugees, he was a part of a disastrous mission that resulted in heavy casualties. Blamed for the mission's failure, he was subsequentlty discharged from the military and villified by the media. At some point, he sent a letter to his parents, pleading for them to believe that he was not responsible.

Rao later reached out to his No-Pat contacts and decided to put his talents as a Recon soldier to use in their cause. He then joined the Exodus Task Force as a tech specialist. This gave him a way to protect those who needed it the most and perhaps, make amends for his part in the failed mission.[1]

Rao is described as curious and inventive, as well as confident, fun, and cool under pressure,

"Scramble enemy vehicle systems, disable Rangers, or trigger base defences from a distance."

Rao features the Cyber Warfare Suite as his specialty. It allows the player to remotely interact with objects and temporarily disable vehicles. Players may also tag enemy infantry for electronic interrogation—upon killing a tagged enemy, the location of that player's nearby teammates is revealed via 3D spotting.

Used against vehicles, it takes roughly four seconds to disable the vehicle's weaponry and equipment, affecting all positions except for passengers. The vehicle's HUD will also be scrambled, slightly obscuring enemy movement and delaying use of the minimap and status indicators. After about ten seconds, the vehicle will regain full control, and will be protected by a firewall for some period of time thereafter, preventing the same vehicle from being hacked. It remains to be seen how the effect stacks with EMP grenades or similar weaponry.

"Those who damage you become spotted"

Rao features the Acquisition trait.[2] Spotting every enemies who damaged him.

Rao improves the fortunes of others since his dishonorable discharge from the Indian special forces. 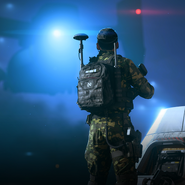