Nelson Bay is a map featured in Battlefield: Bad Company 2. It is available in Rush, Conquest and Squad Deathmatch, as well as in Onslaught, and is the only map to take place during nighttime. It is also one of the few maps to feature almost no vehicles except for the UAV and the Quad Bike (except in Squad Deathmatch), making it a much more infantry intensive map than others. It takes place in a civilian area with a US Navy submarine base in the Alaskan coastline.

Winter has hit hard. The river has frozen allowing heavy equipment and personnel to operate throughout the sector. However, the extreme weather and surrounding woods make it unlikely that any assault will consist of heavy armor. Satellite reconnaissance indicates Russian Special Forces and airborne units have been pulled away from South America and are on mass gathering. A nighttime assault is eminent. Nelson Bay U.S. harbors an underground submarine base that wants to be defended at all cost.

Russian Military minds decided to pull out Airborne and Special Forces units from South America to seize Nelson Bay in a nighttime airborne raid to fight the United States on two fronts. Russian Military leaders designated 75 Russian ground troops in the assault. Armor assets could not be deployed as the terrain around Nelson Bay prevented any armor to be deployed. The Russian operators are expected to enter the bay via parachute and capture various US occupied settlements on their way to an extremely heavily defended US Navy submarine base to destroy an American Naval asset. 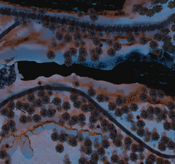 The Russian attackers start off parachuting into the combat zone where a UAV Station and a Quad Bike are available near the landing area. The area is out of bounds to the defenders until the 1st base is lost. 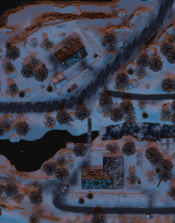 This area consists of two buildings, both of which contain the M-COM Stations and can be destroyed. M-COM station Alpha is located in a southern structure on the 1st floor, while Bravo is located across the river on the 2nd floor of a 3-story building found along the cliff edge of the map. Bravo is arguably the easier to defend due to the short stone wall around the structure, its higher elevation, fewer access points, but both M-COM stations are relatively vulnerable as they are both located in destructible buildings. As a result, the loss of one objective can often result in attackers using the abandoned building as a base from which to fire RPGs at the other building, as well as for snipers to launch mortar strikes. 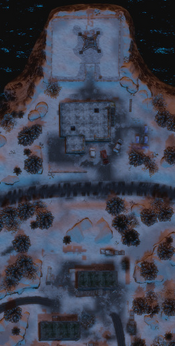 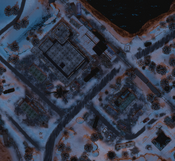 Objective Alpha is located in a warehouse and Objective Bravo is located in the COM Station. Both objectives are simple to defend but hard to retake when a charge is set on the crates. If Objective Alpha is lost, it is best to hole up in the COM station. Although the charge in the communications building with Bravo is quite large, it can be destroyed with continuous fire from rockets and grenade launchers, which also has the advantage of exposing enemies holed up inside.

Russian Airborne and Special Forces units are pushed out of Nelson Bay and two US Submarines are deployed from Nelson Bay.

Nelson Bay is seized and the Submarine base and the US Submarines inside it are destroyed.

Like in Onslaught, the Conquest variant of this map takes place in the early morning instead of at night.

The US spawns at the Submarine Base and must walk a decent distance to the control points. There is an XM312 on top of the comm center like in Rush.

The Russians parachute in and do not have to walk as far as the US to capture the first control points as they actually spawn a little closer than they do in Rush. However, the Russians are unfortunately more vulnerable compared the U.S. deployment because of this. The Russians can be easily picked off by the U.S. in the air at certain times.

Flag Alpha is located by a single story house to the bottom right of the map centre where M-COM Station Alpha is located at the Civilian Area command post in Rush. The house can be brought down by Destruction 2.0, but there is plenty of cover comprising of walls, out-buildings and trees for a capturing side. The house itself is filled with large wooden boxes for cover if some of the walls are destroyed.

Flag Bravo is located by a two-story building along the cliff to the top right of the map centre where M-COM Station Bravo at the Civilian Area command post in Rush. The house can be brought down by Destruction 2.0, but there is plenty of cover nearby, with a usually unused flanking route along the cliff face to the north. The passageway between Bravo and Delta are commonly used and can become a no man's land. Enemies will try to traverse through this area very frequently.

Flag Charlie is located by a set of military buildings to the bottom left of the map centre where M-COM Station Alpha is located at the Army Outpost command post in Rush. The buildings cannot be destroyed with Destruction 2.0, but the walls can be destroyed, leaving a capturing side with little cover except for the various machines within the buildings. A ridge overlooks Charlie, allowing defending snipers (or soldiers arriving from the US Base) to set up positions to attack enemy attackers. The UAV station is located across the bridge near this control point. 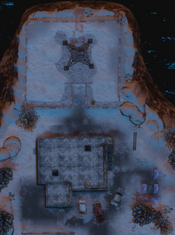 Flag Delta is located near a communications building to the top left of the map centre where M-COM Station Bravo is located at the Army Outpost command post in Rush. The building can be destroyed with Destruction 2.0, but the raised section near the communications tower is a common place for defenders, with an XM312 HMG with ballistic shield and rocks granting precious cover for defenders. The passageway between Delta and Bravo are commonly used and can become a no man's land. Enemies will try to traverse through this area very frequently.

Nelson Bay was added to Squad Deathmatch mode with VIP Map Pack 3. It features the Army Outpost and the Submarine Base. There is a M3A3 Bradley on the inner side free to be captured by any squad. The XM312s normally present on Rush mode are removed.

Nelson Bay is one of the 4 maps featured in Onslaught mode. The time of day has been changed to a morning time.

The Civilian Area consists of two large houses and some small wooden shelters. The flag is near the southern building. The Russians here are well entrenched, with a KORD HMG covering the main road to the flag. No Russian vehicles spawn at this base, but numerous Russian soldiers advance up the road next to the flag when it is under attack, making an established defence a priority for the players. Some soldiers do spawn in the two-storey building next to the cliff, but they are only a threat if the players go near this location.

The Army Outpost consists of three large buildings, two to the south and one to the north. The northernmost building can be collapsed through Destruction 2.0, which can prove both beneficial and hazardous to the US team, as both teams can use it for cover. The flag is located near the building to the north, but a lot of the Russian forces spawn to the southwest, across the paved road. A BMD-3 Bakacha arrives when the players start capturing the flag, and two KORD machine guns with ballistic shields cover the area.

The Submarine base is the largest area in the map, with several small buildings as well as one large 2-story building to the north. The flag is located on this building, and it cannot be destroyed with Destruction 2.0. A Russian CAV spawns here, as well as several Russian soldiers 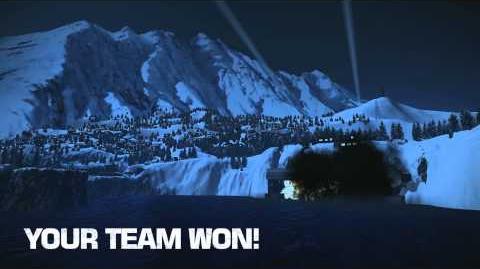