Night Shift is the ninth mission in the singleplayer campaign of Battlefield 3. Misfit 1-3 is back in Tehran, Iran to take down Faruk Al-Bashir.

Clearing the way for the MarinesEdit

The mission starts out with Henry Blackburn and Steve Campo on a building overlooking the landing zone of Cole's assault unit, Misfit 1-4. The player is ordered to shoot out the streetlights illuminating the LZ, allowing an V-22 Osprey to offload 1-4. Misfit 3-1 engages a PLR lookout before Cole and the squad move to OP Bravo.

Once Cole relocates, Blackburn and Campo rappel down to the street level and make their way to RV Bravo. During this section, the player must avoid being seen by PLR foot and vehicle patrols, as it is required for the player to sneak through checkpoints undetected. Blackburn and Campo shoot an enemy sentry while making their way through back streets, before reaching the rooftop designated RV Bravo. They are tasked with covering Cole's team as they cross a street, taking out a PLR patrol in their path. Once across, Misfit 1-3 moves on again. As before, they must avoid discovery by the PLR, using an overpass to circumvent an enemy truck convoy. While moving through an apartment building, a struggle ensues with a guard who alerts nearby soldiers, forcing the player to flee into a sewer channel opened up by the earthquake. On street level, a short gun battle erupts before Cole prompts the team to hasten to the mall observation post.

Cutting through an adjacent building, 1-3 finds the place where Jonathan Miller was executed. Exiting the building, the team links up with Cole and 1-4 outside the mall. The team is instructed that Al-Bashir is needed alive, and that the mall will be used as a fallback position if "things go sideways". Blackburn and Campo take up positions in a destroyed apartment, positioned to assist with Misfit 1-4's assault on Al-Bashir's presumed location. Cole makes the breach, and PLR forces begin pouring into the area. It takes several enemy waves as the location is systemically searched, during which time Blackburn eliminates several priority targets such as RPG gunners and a technical. While fending off the PLR, Al-Bashir tries to escape in a vehicle. Blackburn sprints across rooftops to intercept him at an intersection, raking the car with bullets and causing it to crash. Al-Bashir is thrown from the vehicle and critically injured. Campo is forced to carry him as he and Blackburn conduct a fighting retreat back to the mall.

Defending Campo and the HVTEdit

On the second floor of the mall, Blackburn and Campo fight a defensive battle with the oncoming PLR forces while awaiting extraction with the insensible Al-Bashir. Blackburn has Claymore mines to assist in this task. As PLR forces break away from combat with 1-4 and begin filtering in through the second and third floor entrances, Campo relocates the Al-Bashir to another storefront. After some time, Razorback 2-2 lands in the plaza outside the mall. Campo carries Al-Bashir to the craft while the rest of the Marines are ordered to hold back the PLR for a little while longer. Blackburn and Cole's team finally extract on board the V-22 Osprey, but Al-Bashir is found to be on the verge of death despite medical aid. After rambling about Solomon and how he betrayed Al-Bashir to obtain the portable nuclear devices, and alluding to the time and method of transport used in his plan to detonate them, he dies. Campo and Blackburn are left only with his cellular phone for intel on Solomon's plot. 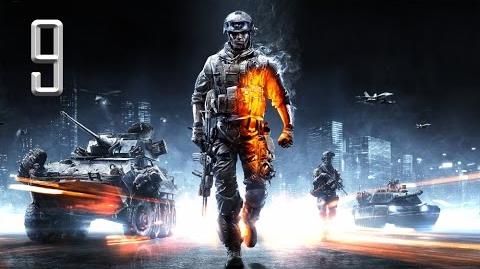 Retrieved from "https://battlefield.fandom.com/wiki/Night_Shift?oldid=343824"
Community content is available under CC-BY-SA unless otherwise noted.