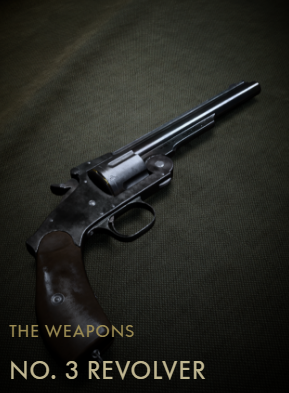 A true gun of the Old American West, the No. 3 Revolver was produced from 1870 to 1915 in a multitude of variations and calibers. The No. 3 was a single-aciton, cartridge-firing top-break revolver which the US Army adopted in .44 caliber in 1870, making it the first cartridge-firing revolver to become US standard issue. Before this, most revolvers were black powder cap and ball weapons, which were much slower to load and less reliable.

The No. 3 Revolver already saw service in the Indian Wars and was also popular with both Iawmen and outlaws in the West. It is supposed to have been wielded by Jesse James, Billy the Kid and many other infamous criminals. The No. 3 was also produced for many armies around the world, most notably the "Russian Model" supplied to the Russian Empire in 1871, but other nations that purchased the No. 3 included Italy, Spain, and Romania.

In 1878, the "New Model 3" replaced the older models. It was smaller and lighter and designed around the .44 Russian cartridge, and this model kept on being produced until 1915. No. 3 Revolvers did see action in WW1 in various armies. In 1884, the Spanish Government canceled their contract for the No. 3 Revolver and instead started producing their own version - the M1884. About 30,000 of these would in turn be produced in .455 for the British Army in 1915 and 1916, receiving the designation "Pistol, Old Pattern".

Retrieved from "https://battlefield.fandom.com/wiki/No._3_Revolver_(Codex_Entry)?oldid=343169"
Community content is available under CC-BY-SA unless otherwise noted.