No Man's Land is a Codex Entry featured in Battlefield 1. It is unlocked by reaching no man's land undetected in the Fall From Grace chapter of the Friends In High Places singleplayer mission. 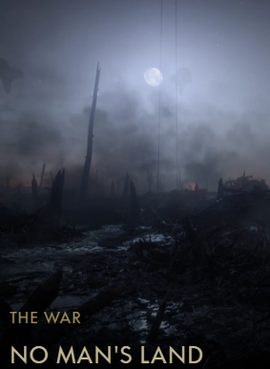 In the autumn of 1914, both sides of the Western Front lost the opportunity of flanking each other. The force of modern weaponry, such as machine gun and field artillery, made it a suicidal venture to reside on open ground, thus completing the phase of mobile warfare. The soldiers disappeared in the safety of trenches and dugouts.

Heavy grenades tore the earth between the trenches, while soldiers hurried across the country in the hope of a breakthrough that belonged to no one. Forests were shot in pieces, poison gas killed fauna and flora, and heavy rains filled millions of shells with water and turned northern France into a huge swamp. It was truly a death zone - created by man with the help of modern warfare.

Retrieved from "https://battlefield.fandom.com/wiki/No_Man%27s_Land_(Codex_Entry)?oldid=343393"
Community content is available under CC-BY-SA unless otherwise noted.