Battlefield Wiki
Register
Don't have an account?
Sign In
Advertisement
in: Construction, Concepts, Features of Battlefield 1942,
and 4 more

Non-player characters, also known as Bots, are a type of artificial intelligence program, with each individual instance of the program representing a player. Bot intelligence varies with difficulty and the installment of the series they appear in. For example, with the Easy difficulty, they seem untrained and are inaccurate shooters. But as difficulty progresses, they become more resilient and are accurate shooters trying to aim for headshots.

They are available offline and within online co-op game modes and can perform basic actions such as commandeering vehicles, manning machine gun emplacements and capturing control points. They will also respond to threats such as flanking gunfire, live grenades, and the occasional Commo Rose command. They are used mainly to fill teams in the singleplayer mode in Battlefield 1942, Battlefield 2, Battlefield 2142 and Battlefield 2042. Bots can also be used in these games' Conquest Co-op gametype. Some maps are not available with bots, although third-party mods compatible with the first three games can add or improve the necessary pathfinding code. Beginning with Battlefield 2: Modern Combat, bots are present in the singleplayer campaign, appearing both as squadmates and as enemies. They are also featured in Battlefield: Bad Company 2's Onslaught DLC, appearing as the enemy waves.

All maps can be used with bots in the The Road to Rome expansion pack.

All maps in Battlefield Vietnam can support bots except those added in later patches such as Saigon.

By default, bots can't be played on 32- or 64-player variations of maps, but this can be changed by manually editing game files or downloading modifications. However, as Battlefield 2 bots follow set paths rather than using dynamic pathfinding, they will not be able to function in regions added by 32- and 64-player maps (with the exception of Great Wall, as its 32-player variation is actually the same as it's 16-player variation).

Bots can respond to player requests via the Commo rose, such as providing a Support action, or entering/exiting a vehicle. Players can freely switch seats with bots, or even "nudge" them into a certain position with careful planning.

By adjusting configuration files outside of the game, players can add more bots in singleplayer.

Bots appear in the singleplayer campaign of Battlefield 2: Modern Combat as teammates and enemies for the player. With the Hot-swap feature in the game, the player can take control of any teammate controlled by a bot at any given time. Bots, however, do not appear in the multiplayer portion of the game.

Bots can make use of most weaponry and all vehicles. By default, they possess the same unlocks as the player, and one tier above.

Bots tend to be reckless with grenades, throwing them at infantry and vehicles regardless of their teammates.

Bots can plant RDX Demopaks, preferring captured flags as area denial and vehicles at close range. Bots only cloak to escape when low on health. Cloaked bots will only return to battle when they receive healing. (If you find yourself short on offense, you will undoubtedly find injured recon bots at the map boundary.)

Bots are very accurate with anti-vehicle weapons and emplacements, but do not use these against infantry. Bots do have trouble against air vehicles, as they do not use the SAAW 86 Anti-Air Weapon. Bots do not make use of mines.

Bots do not respond to spotting or other forms of detection, and thus do not use related abilities or gadgets. Bots also do not use any of the Northern Strike unlocks.

An "on-demand" Commander slot is filled whenever a human squad leader requests support. Bots can call down Orbital Strikes, preferring to target players who camp and flags that are being captured. No other assets are used by bots.

Non-player characters make an appearance in the first Bad Company game, being the primary opponent and allied support in the game. However, unlike Refractor-based games, they are not supported on any multiplayer map variations and appear only in the singleplayer aspect of the game.

Like in the first Bad Company game, non-player characters serve as the primary opponents and support for the player character. In the base game, they are only found in the singleplayer campaign.

The Onslaught DLC adds a mode which is somewhat more similar to the Refractor-based games, with multiplayer maps being used with bots. 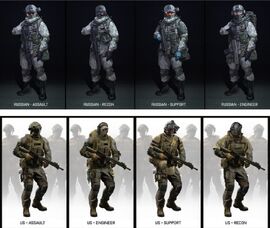 Bots are a returning feature in Battlefield 2042. As the game features no singleplayer campaign, bots occupy player slots on servers until human players take their place, reflecting how bots appear in some other recent game series. Players may also enter matches solo or in a full squad and face off against bots. Servers within the Battlefield Portal may also use bots as an available option. This makes the game accessible to players in regions where Internet access is subject to high latency, where player count is lacking, or for those who prefer not to play against human opponents. An online connection is still required, suggesting that the bots are server-side entities, rather than the client-side entities of prior games.

Bots can be recognized by their unique appearance based on their faction and class. as well as a fictional rank and name assigned to each one on the scoreboard. Additionally, bots can be identified with their own unqiue Player Card. Unlike the use of bots in past installments, normal multiplayer progression is permitted against bots, including weapon, vehicles, gear, and task progression for Badges and Player Card Images and Tags. They may also be used to obtain Achievements/Trophies. It should be noted, however, that the experience earned against bots is capped to prevent XP farming.