Obrez Pistol is a Codex Entry featured in Battlefield 1, introduced in the Battlefield 1: In the Name of the Tsar expansion. It is unlocked upon obtaining ten kills with the Obrez Pistol. 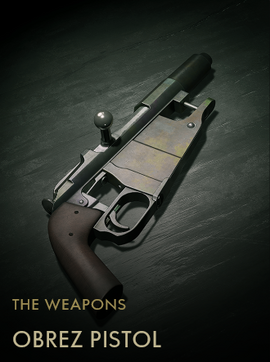 "Obrez” is Russian for “cut-off”, meaning a modified rifle were the barrel and stock have been drastically cut-down to make the weapon as compact as possible. On the Western Front in WW1, all belligerents used sawed off versions of bolt-action rifles, like the British SMLE, in the claustrophobic fighting of underground tunnels. On the Eastern Front, battles were much more mobile and tunnel warfare was not as prominent, and hence cut-down rifles were not particularly common. This would change after the Russian Revolution and during the following Civil War, when millions of Russian troops returned home, often bringing their Mosin-Nagant rifles with them. Most of the Russian soldiers were peasants, and it became quite popular among them to cut-down their Mosin-Nagant rifles to be able to conceal them and use for defense on the farms. With such a radically shortened barrel, accuracy naturally suffered greatly, making it virtually impossible to hit a target beyond 50 meters. But the short barrel in combination with the powerful rifle cartridge would also make the bullet tumble chaotically, which inflicted terrible wounds, as well as producing a burst of flame which reached several meters from the muzzle – both having a very demoralizing effect on the enemy. After the Russian Civil War the Obrez rifles would continue to be used among partisans and guerrillas of WW2, and also by criminals even into the 1980’s.

Retrieved from "https://battlefield.fandom.com/wiki/Obrez_Pistol_(Codex_Entry)?oldid=343215"
Community content is available under CC-BY-SA unless otherwise noted.