Observation Balloons is a Codex Entry featured in Battlefield 1. It is unlocked by killing five enemies on foot in the chapter Over the Top in the singleplayer mission Through Mud and Blood. 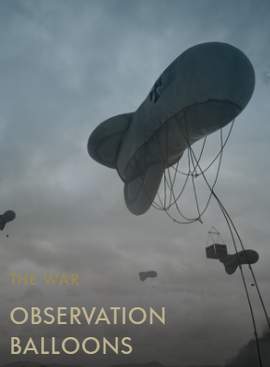 Propelled by illuminating gas or simply hot air, Observation Balloons were the extended eyes of the army. With the ability to ascend up to 1,500m/4,000 feet, they gave the balloonist the ability to spot enemy movement as well as the muzzle flashes of their distant batteries. They would pass down their observation via flags or wireless radio signals, alerting officers to changes on the battlefield. Sitting in a basket with only binoculars and a codebook, the observer was in constant danger from enemy aircraft trying to shoot down the balloon by setting it on fire with incendiary bullets or rockets. Only anti-aircraft guns and allied fighter pilots were able to protect them, for parachutes were in their infancy.

Retrieved from "https://battlefield.fandom.com/wiki/Observation_Balloons_(Codex_Entry)?oldid=343403"
Community content is available under CC-BY-SA unless otherwise noted.