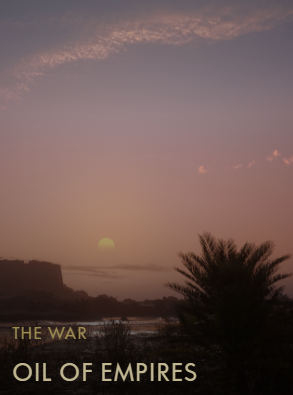 When the modern combustion engine was first developed in the 1880s, few realized how much it would change the global economy. But over the next decades, in every shipyard it became obvious that oil power was superior to coal in every way.

A motor could now reach full power in 30 minutes instead of six hours, it required a fraction of the men to run it, and a ship's range increased fourfold. Even before the war the Dreadnoughts of the mighty British navy had begun to convert to oil power, but oil was to be found far from British shores.

Much of the British war effort in the Middle East was to protect British oil supplies, the Suez Canal transport route, and to take or destroy the Berlin-Baghdad railway, Germany's oil supply line to the Ottoman Empire. As the war progressed, and the airplane, the car, the submarine and the tank were produced in greater and greater numbers, oil became ever more important.

Retrieved from "https://battlefield.fandom.com/wiki/Oil_of_Empires_(Codex_Entry)?oldid=343329"
Community content is available under CC-BY-SA unless otherwise noted.