The Rottweil Skeet Olympia 72 (also known as the Model Monreal or the Olympia) is a German-Italian over-under double barreled shotgun. The weapon's design originates from Troisdorf, Germany. It was produced by Italian manufacturer Fratelli Gambaby in 1972 and ceased in the late 1980's.

The Olympia 72 appears to have adjustable chokes. The weapon has wooden furniture and has ventilated ribs placed above the barrels. A rubber buttplate is placed at the rear of the stock to absorb some recoil. The Olympia 72 can be separated into two parts; the receiver and the barrel.[1][2]

24 meters
"Pull! Pick out enemy heroes from a distance with this competition grade shotgun."

Two variants of the Olympia 72 are featured in Battlefield Heroes: the Royal Steven's Sporting Shotgun and National Franz's Fielding Firearm. Both variants were released to celebrate the 2012 London Olympic Games. 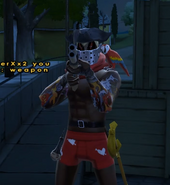