Operation 925 (Persian: عملیات ۹۲۵) is a map included in the Battlefield 3: Close Quarters expansion pack, and is located in a commercial building in Tehran.

The map consists of three floors, including an underground car park. Compared to the other maps in the expansion, its design has few stairways or vertical paths, effectively confining each floor as a separate zone of combat. However, it also features plenty of lateral cover and low walls in the form of office furnishings.

Alpha is in the Cafeteria area. There is a balcony that overlooks the flag which is an effective spot to defend the area. The outside area can be reached through the two sets of doors or the windows allowing players to flank any attackers/defenders. The base itself provides almost no cover except for the store counter.

Bravo is located in the Garage area. It is surrounded by two burning vehicles and construction materials. The vehicles themselves provide excellent cover from oncoming enemies to the right or left of the flag because of their size and the smoke billowing out. There are also multiple stairways to access the base along with dozens of cars and pillars to provide cover.

Charlie is found in the lobby area of the map. The flag is the centered in the lobby with few pillars and debris providing a little amount of cover. There are two overhanging balconies along with the main desk area which provide a large view from above. There are multiple staircases and hallways leading to many other points on the map.

The Parking Garage (B Flag)

The Lobby (A Flag) 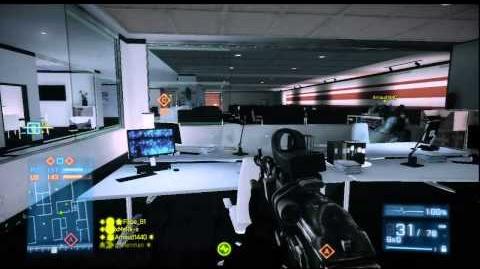 Retrieved from "https://battlefield.fandom.com/wiki/Operation_925?oldid=367803"
Community content is available under CC-BY-SA unless otherwise noted.