Operation Albion is a Codex Entry featured in Battlefield 1, introduced in the Battlefield 1: In the Name of the Tsar expansion. It is unlocked upon winning a round on Albion. 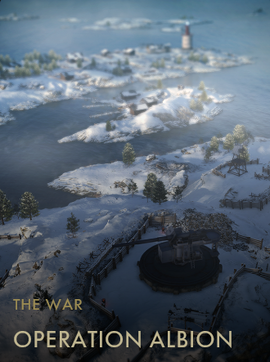 On September 29th, 1917, a German invasion force of 25,000 soldiers accompanying an armada of 10 dreadnoughts, 353 other ships, 6 Zeppelins, and nearly 100 airplanes appeared in the Estonian archipelago. Quartermaster General Erich Ludendorff of the German High Command had proposed a decisive strike that would cause Russia's provisional government under Alexander Kerensky to finally pull out of the war. A massive amphibious operation, the largest the world had seen to this point, would capture the islands of Ösel, Moon Sound, and Dagö, and take control over the whole Gulf of Riga. This would not only give support to the German troops at Riga itself, it would also prepare for a potential future offensive towards Petrograd, the seat of the Russian government. Although the Russian army was disorganized by revolution and desertions, the defenses held fast. Powerful 30,5 cm shore batteries dueled with the German dreadnoughts, while minefields blocked any German advance. The older Russian battleships in the straits were no match for the German fleet head on, but in concert with the coastal defenses they could hold their own. It was not until the German minesweepers finally paved a way through the minefields that the German navy could fully advance. At the same time, the second Russian revolution of the year silenced the naval guns. The gun crews deserted, and pilots and officers were arrested. The German infantry quickly seized the islands and took 20,000 prisoners, and the remnants of the Russian navy were forced to flee the Gulf.

Retrieved from "https://battlefield.fandom.com/wiki/Operation_Albion_(Codex_Entry)?oldid=317029"
Community content is available under CC-BY-SA unless otherwise noted.