Somewhere near the Sea of Japan

Raft, F4U Corsair, A6M Zero, Type 97 Chi-Ha, Type 95 Kurogane, Type B1 Submarine
"See, the way I figure it, we got atomic bombs, Krauts got V-2s, the Japs have gotta have something too."

Operation Aurora is the first mission in the singleplayer campaign of Battlefield: Bad Company 2. The player takes part in a raid on Japanese soil to find a defecting scientist who claims to have valuable information on a Japanese super weapon, later revealed as the Black Weapon. The operation was said to have been erased from USMC records to cover up the fact that they sent Marines on a suicide mission to investigate the "Black Weapon."

"Get outta my way! I gotta save me some cheerleaders!"
This section contains spoilers for
Battlefield: Bad Company 2.
"Autumn 1944, Sea of Japan. Not long before the atomic bomb would bring an end to World War II. A small group of US commandos were sent in to extract a Japanese scientist with war-decisive information. On October 6, at 0600 hours, Operation Aurora commenced. Twenty minutes later it was over. The fate of Operation Aurora was kept from the public. All records were destroyed. It became a myth. This is what really happened that day."

The mission begins with Thomas Wyatt on a boat along with his squad members Sarge, Faraday, and McKee. The group, along with Able squad, begin moving through the Japanese shore defenses and bunkers. After avoiding sentries, Able squad is fired upon by a machine gun nest, and the crew is killed.

The nest soon discovers Wyatt's boat and shoots at them, forcing the four man squad to dive in the water, and forcing Wyatt to lose his Thompson SMG. As a joint US Army Air Corps/US Navy air raid begins, Wyatt and the rest of the squad surfaces, and move to the shoreline adjacent to the trenches. Wyatt uses his knife to take out a guard while Faraday drowns another.

Sarge passes Wyatt the second guard's Type 100 once they get to the other side of the small wooden bridge. Wyatt then moves up into some trenches with McKee, clearing out Japanese AA gun emplacements, and then regroups with Sarge and Faraday who took the path above the trenches. They proceed to find the defecting Japanese scientist. Upon reaching the scientist, the squad hears a strange sound.

The scientist says, "The Black Weapon - it's starting. We're dead men." The Japanese cut off the squad's original escape route, and they are forced to get to a sub on the other side of the island. The Squad fight their way through an airfield and commandeer two Type 95 Kuroganes. They head to the submarine base, with Wyatt defending them with the mounted M1919 Browning machine gun on the Kurogane he was in.

After breaching the subpen entrance, the squad clear the base and board a sub taken by Red Group. When they leave port they once again hear the strange sound, except this time it is much louder. As they look back to the island, they see a huge explosion that unleashes a massive tidal wave which engulfs the sub and kills the entire crew. 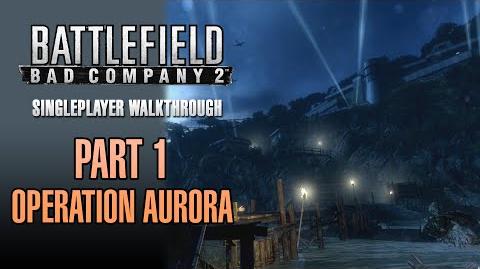