Operation Battleaxe (Arabic: عملية بلطة الحرب) was a North African-theatre battle of World War II, fought in 1941 by the forces of the United Kingdom's Army and Nazi Germany's Afrika Korps. It was hoped that a Nazi defeat would ease the Siege of Tobruk, but was nearly a complete disaster. On June 15th, 1941, British forces attacked the Afrika Korps positions and scattered them, while withstanding several counterattacks. Elsewhere, British tanks came under heavy fire from Nazi artillery. Over half of all British tanks were destroyed on the first day. On the second day, approximately three-fourths of their tanks were gone. The Afrika Korps then counterattacked the British Army with a flanking maneuver, forcing the British to retreat on June 17th. The operation was a humiliating defeat for the British Army.

It is a map available in Battlefield 1942.

"General Rommel and his Afrika Korps have been gaining key victories in North Africa. To put a stop to his advances and end the Axis siege on Tobruk, British Command has devised Operation Battleaxe. It is believed that this counteroffensive will provide Allied forces with some much-needed momentum to defeat the enemy.

Thanks to the arrival of reinforcements, the Allies now have the men and material to combat Rommel's Panzer Division. As part of this operation, a British light tank group has been ordered to engage the enemy near Sollum, an Egyptian town close to the Libyan border. Allied command needs to keep an eye out for Rommel. He's had time to strengthen his positions and he's sure to have a few tricks up his sleeve."

"Berlin's effort to assist Italy in defeating the British in North Africa has been successful. With Rommel leading his armored divisions to victory in the desert, it will only be a matter of time before Germany recaptures Tobruk and takes other key spots along the Mediterranean. After Germany claims ultimate victory in North Africa, it will have secured the region's valuable supply line to natural resources in the Middle East.

While units from the Afrika Korps lay siege on Tobruk, a significant force will remain at Sollum to keep it from falling to the British. At nearby Halfaya Pass, Rommel has stationed a number of 88-mm anti-aircraft guns, which he'll use to stop enemy armored divisions in their tracks. If Intelligence reports are accurate, the enemy is heading straight into Rommel's trap. This will be a glorious victory for the Third Reich."

"Courage, lads. If we hold at least half of the outposts against the Germans, we can win this battle."

"Push the British, do not relent! Capture at least half of the outposts and we will force their surrender."

The map provides each of the British and Germans with an uncapturable base on plateaus opposite each other. In between lies a large valley with 6 control points in, 3 British and 3 German, arranged in a circle. Both teams have the same amount of resources (tanks, planes, etc.).

Most of the flags have a similar layout; a bunker (with mounted machinegun), sandbags, barbed wire, and a number of supplies, including medical cabinets and ammunition boxes. Certain flags (located at the middle in between the left and right bunkers will spawn a tank (either a Panzer IV or an M4 Sherman).

Cannot be captured by the Germans. Spawns two Spitfires, two 40mm Bofors, an M3A1, an M10 Wolverine, and an M7 Priest.

Cannot be captured by the British. Spawns three Flak 38s, two Bf 109s, a Hanomag, a Tiger, and a Wespe.

"The Germans were prepared, but the reinforced Allied forces had enough firepower to win this key victory in the North African campaign. To gain victory, the Allies withstood one of Germany's greatest military commanders and a surprise attack by the Luftwaffe. Though Rommel is on the run now, he will surely regroup as soon as possible to launch a counterstrike. Now, though, it is time for troops to rest and prepare for the next battle."

"As Berlin predicted, the Allies were totally surprised by a German air attack. Germany has dealt a decisive blow at Sollum and sent the British running back to Egypt. Enemy tanks are smoldering in the sand and soon Germany will control the valuable supply routes in North Africa."

"It seemed as if Rommel was always one step ahead of the Allies in this battle. Bogged down by obstacles and minefields, and pinned down by an unexpected air attack, the Allies didn't have a chance. After some early gains, Operation Battleaxe turned into a complete failure for the Allies. It's time for Allied forces to retreat and get ready for the next conflict in the desert."

"Not even a surprise air strike by the Luftwaffe could save the Desert Fox from being outfoxed at Sollum. Now Rommel will have to regroup and prepare for the next skirmish. The Afrika Korps seemed to have superior troops and weaponry, and they definitely had an advantageous position at Halfaya Pass. Still, the British troops were able to deal Rommel a stunning defeat. Berlin will expect different results in the next encounter." 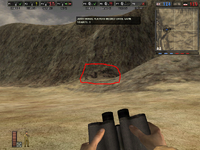