Operation Guillotine is the fifth mission in the singleplayer campaign of Battlefield 3. It takes place during an all-out battle between the United States Marine Corps and Iranian Army and PLR insurgents in the streets and outskirts of Tehran, following the coup that placed Faruk Al-Bashir at the helm of Iran.

The mission begins on a hill overlooking Tehran, where the members of Misfit 1-3 are waiting for orders to commence the assault on an apartment complex housing strategic intelligence. The Marines of Henry Blackburn's squad are lying at the top of the hill, and Campo passes Blackburn the M224 Mortar that the squad are to transport down to the canal. Cole, the unit leader, orders the assault after getting confirmation that friendly Marines of Haymaker unit were at their jump-off position, and the Marine unit begins their assault. PLR artillery lands around the Marines as they charge down the hill, and cause some Marines to stumble, but few casualties.

Campo and Blackburn set up the mortar behind a wall, and launch an illumination round to help their comrades in the assault. Montes takes over from Blackburn, who uses a fellow Marine to "buddy boost" over a concrete wall, and pushes towards a canal where fellow Marines are assaulting PLR positions. Blackburn and the rest of the Marines push into the canal, but are pinned down by fire from machine gun and mortar positions on the other bank. Blackburn flanks through the canal to the right, eliminating several PLR soldiers who are defending the area, and arrives on the opposite bank of the canal. Using grenades and rifle fire, Blackburn eliminates the two positions, and his fellow Marines, alongside Campo and Montes, who had moved up as well, push towards a rendezvous with Haymaker company, who are clearing apartment complexes on the canal bank. Blackburn's squad are tasked with clearing one, and storm the building after a grenade is tossed inside, blowing off the door.

Using a shotgun, Black kicks open several doors, before moving towards a final door towards the end of a main corridor. However, a PLR soldier kicks open the door, throwing Blackburn back, but Black is able to shoot the soldier with his shotgun. Blackburn's squad then rallies outside, meeting up with Captain Brady.

Blackburn's squad, rallying outside in the street, are told to follow his unit towards the Metropolitan Bank. Boarding a Humvee, the squad proceed through the streets into a dark tunnel. The Marines of Blackburn's unit question the route towards the bank, and, upon exiting the tunnel, come across a fuel-tanker blocking the road. Disembarking the vehicles, the Marines advance towards the makeshift barricade, but an RPG fired from an overpass hits and blows up the fuel tanker, causing casualties amongst the Marines. Blackburn's squad, led by Campo, flank the PLR ambushers and arrive on the overpass, engaging the insurgents from the side. Clearing the street, the squad pushes up and clears the street further down the road, but are engaged by a T-90 tank, which forces the squad to take cover in cracks in the road surface. The Marines duck into cover in an outbuilding, but are hit by a round from the T-90's cannon before reaching safety.

Regrouping in the outer building, the Marines check themselves before advancing onwards. They exit the outbuilding into a corridor, which leads towards a road leading to the bank. A T-90 reverses down the street beside the exit, and begins to traverse it's turret towards the squad, but is destroyed by an AT4 rocket before it can shoot. As the Marines push towards the bank, Blackburn's squad moves towards the Javelin team overlooking the bank. However, a PLR unit gets to them first and kills all three members of the unit, and Blackburn is forced to pick up the Javelin himself. Three T-90s enter the plaza, but using the Javelin, Blackburn destroys the tanks.

The Marines now regroup outside the bank, but are pinned down by the PLR defenders. Matkovic and Blackburn flank the side, climbing over a wall and arriving at the rear of the bank. With help from Blackburn, Matkovic jumps up and releases a ladder, allowing the pair to access a catwalk, and then jump through an open window into a toilet cubicle. A PLR soldier bursts into the toilet block, but Matkovic grabs him, allowing Blackburn to plunge his knife into the insurgent's chest. Moving in front of Matkovic into the bank's atrium, Blackburn kills another soldier using his knife, dragging his body away, before the rest of the Iranian defenders react and begin firing on the pair. With help from Campo and Montes, who, alongside other Marines, have pushed into the atrium, Blackburn and Matkovic clear the mezzanine floor of the artium, as well as eliminating several PLR fighters on higher floors, who were firing down onto the Marines.

Regrouping at the entrance to the bank's basement areas, Captain Brady tasks Blackburn's unit with gaining access to the bank's vault, and to look for any intelligence concerning Al-Bashir. The four move into the area quickly, and find themselves at an empty lift shaft. Campo and Blackburn rappel down, tossing a flashbang through an open set of doors below, and charge into a squad of four PLR insurgents, engaging and eliminating them. Montes and Matkovic follow, and the squad push through and engage the fighters defending the vault entrance. After eliminating between them a sizeable number of defending guards, the squad rallies outside the vault, and break open the iron gate. Montes, Blackburn and Campo check the vault, while Matkovic checks the computer screens at the security station. Finding the vault empty of life, Montes and Campo find maps of Paris and New York, as well as train timetables, and a large, green box. The three Marines lift open the box, to find a portable Russian nuke, but with spaces for two others, which were missing.

Maktovic then calls the three of them over to the computer screens, where a CCTV feed shows Al-Bashir, Solomon (unknown to the Marines), and an Iranian soldier on the camera feed. Campo makes the decision to leave the intel behind and focus on moving the nuke, and radios Misfit Actual to report that they had found a portable WMD in the bank, which was very slowly coming down above the Marines. 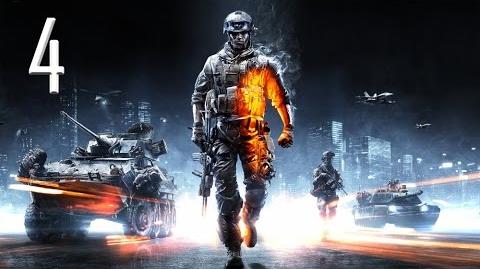 Battlefield 3 Walkthrough - Operation Guillotine
Add a photo to this gallery

Tehran
Add a photo to this gallery

Retrieved from "https://battlefield.fandom.com/wiki/Operation_Guillotine?oldid=336651"
Community content is available under CC-BY-SA unless otherwise noted.