United States of America vs.

PC
"July 18, 1966 - Operation Hastings was the largest combined operation in the war to date. Elements of the U.S. Marine Corps, the South Vietnamese, and the Republic of Vietnam participated in one of the first "Search and Destroy" missions of the war. Operation Hastings is a Head On Map. Each force begins with one Control Point. The force that controls the majority of the Control Points will cause the other team begin a constant ticket loss."

Operation Hastings is a map featured in Battlefield Vietnam. It is a very large map, consisting of a network of waterways dividing small islands and plateaus, surrounded by highlands, and all covered in jungle. The most prominent features of the map is the temple on the East side of the map.

The US Base is the starting point for the 3rd Battalion, 5th Marines (USMC). It consist of three flat levels leading downwards to the water. The top level is an airstrip and a helicopter pad where the fighter jet and a transport helicopter spawn. The next level is the largest and is where there are two helicopter pads where the attack helicopters, and the anti-air turret spawn, and a few bunkers made of sandbags and wooden beams, and where an APC spawns. The last level is associated to the height of a few wooden docks where two boats spawn. It, like the NVA Base, is particularly difficult to capture, as the timer for a single person to capture the flag starts at 2:00, instead of 0:12 for any normal flag.

Under USMC control, one M113, one A-7 Corsair II, two UH-1Ds, one UH-1C Transport, two Patrol Boat Rivers and one M55 spawn here. Under NVA control, all American vehicles will remain until destroyed, and two sampans spawn, but only once the PBRs are destroyed or displaced. 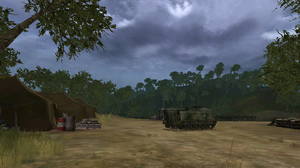 In singleplayer, the M113 spawns between the M55 and a bunker (see next image)

The first and second levels of the base

The docks where two PBRs spawn

The Forward Fire Base is the closest flag to the US Base. It consists of a camp on a plateau, surrounded by sandbags, tents and bunkers. There is also another bunker and agglomerations of sandbags in a lower level, along with a helicopter pad. From the plateau, there is a road that leads directly to The Temple.

Under USMC control, an M113 and PBR spawn. Alternatively, under NVA control, a BTR-60 and Sampan spawn. 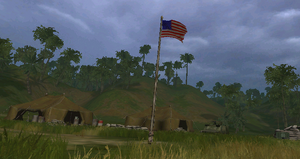 The flag under USMC control

The flag under NVA control
Add a photo to this gallery

The Temple is notably the most prominent flag of the map. It consists of a large, tall temple that players can climb by a long set of stairs, either from in front or from in back, leading up towards a small open chamber. It's from this chamber that players can capture the flag. In front of the temple is a small lake with a singe waterway in and out. This lake is surrounded by road, one direction leading towards the Forward Fire Base, another leading up a hill that heads towards The Plantation. The Temple is closer to the US Base, but, with the proper haste and initiative, any faction can capture the flag first. When the USMC holds it, a Sheridan and PBR spawn, and their counterparts under the N.V.A.

The American vehicle spawn, viewed from the South from The Temple 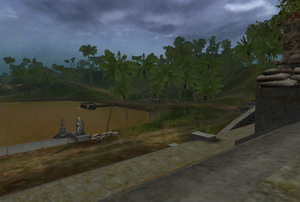 The Plantation is a flag in the center-East of the map. It consists of a sloped road with a dock and a semi-destroyed concrete house at the bottom, where a Sheridan and PBR (or their counterparts)spawn, and a few rice terraces along the way. There's a road leading to the west, up a hill towards The Temple, and another leading south towards The Fishing Village. 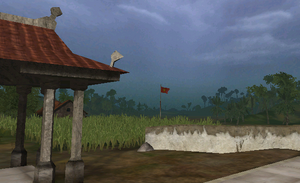 The Plantation under NVA control, viewed from atop the hill 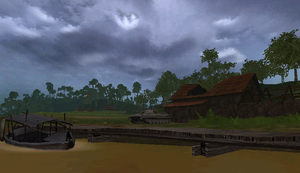 The NVA vehicle spawn
Add a photo to this gallery

The Fishing Village is the closest flag from the NVA Base. It consists of a small village made of wooden huts along a river. Many of the structures stretch out within the water and are elevated on terraces by bamboo sticks. The was apparently a bridge to cross the river towards The Plantation, but it collapsed and the extremities remain along the shore. For this reason, APCs and amphibious tanks will have a problem crossing the river, since the two pieces of bridge can actually stop the APCs, and leave them floating in the water. There is a path on the East, past the last house in the village, that can lead the APCs safely across the river.

Under USMC control, one M113 and PBR spawn. Alternatively, under NVA control, one BTR-60 and one Sampan spawn.

The NVA Base is the starting point for the 5th Battalion, 812th Regiment (NVA). It consists of a few levels, like the USMC base. The top level is the airstrip, where the fighter jet and light tank spawn. The second level consists of a few bunkers made of sandbags and wooden beams, with two helicopter pads in the back surrounded by sandbags, where the two attack helicopters spawn. The last level consists of a concrete dock extending into the water and a wooden dock along the a road, where an APC and boat spawn. In singleplayer, the boats spawn more within the water and to the right of the dock.

The docks when the NVA Base is under USMC control 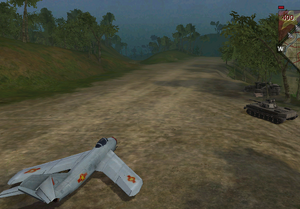 The helicopter pads and bunkers

The concrete dock under NVA control
Add a photo to this gallery
Retrieved from "https://battlefield.fandom.com/wiki/Operation_Hastings_(Battlefield_Vietnam)?oldid=339383"
Community content is available under CC-BY-SA unless otherwise noted.