Operation Red Tide is a Codex Entry featured in Battlefield 1, introduced in the Battlefield 1: In the Name of the Tsar expansion. It is unlocked upon completing a round of the Red Tide Operation. 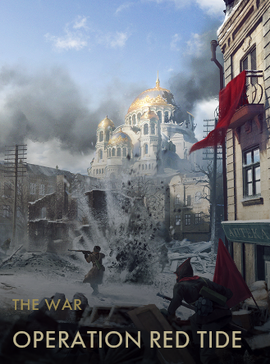 The strongest military opposition to Bolshevik rule formed in the Donbass Region under the former imperial Russian Generals Anton Denikin and Pyotr Krasnov. Krasnov´s well trained Don Army, fighting for the White Russians, was around 45,000 men strong and equipped with 600 machine guns and 150 artillery pieces, and they set their sights on the city of Tsaritsyn, a vital strategic asset. With its large railway hub, road connections, and communication network, it not only supported a vast industrial capacity, Tsaritsyn basically controlled the whole northern Caucasus. In the autumn of 1918, White Russian troops attacked from the south, while the Don Cossacks to the north cut the city off from Moscow. The Bolsheviks- the Red Army- were pushed to the west bank of the Volga River, but were unwilling to give up the city. Their military committee under Joseph Stalin and Kliment Voroshilov rallied the workers of the city and established a defensive perimeter with multiple trench lines and barbed wire emplacements. Again and again, the White Russians attacked, but were unable to break through. The battle continued throughout 1919 with reinforcement on both sides. The Red Army’s “Steel Division” broke through from the north while the Whites were strengthened by the armored train “United Russia” and a British tank mission. The Tank Corps nearly captured the city, with a single tank breaking through into the city center, but the lack of supplies, particularly fuel halted the advance. In 1920, the Red defenders were finally relieved by reinforcements from Moscow and were strong enough to push the Whites out of the city for good. To honor Stalin´s resolute defense of the system, Tsaritsyn´s name was later changed to Stalingrad.

Retrieved from "https://battlefield.fandom.com/wiki/Operation_Red_Tide_(Codex_Entry)?oldid=343356"
Community content is available under CC-BY-SA unless otherwise noted.