"Bro, America was founded by terrorists, for terrorists. What do you think the fucking Revolutionary War was? History is determined by the motherfucking victor."

Operation Swordbreaker is the second mission in the singleplayer campaign of Battlefield 3. In the mission, United States Marines undertake "pacification" operations in the Iran-Iraq region and attempt to restore stability to the region.

Arrival of the 1st Reconnaissance BattalionEdit

Henry Blackburn, David Montes, and the rest of Misfit 1-3 are traveling in an LAV-25, and, over the radio, are ordered to dismount and locate a squad known to be searching for IEDs. Montes remarks on the state of the region, how "this part of the world get's fucked up all the time", to which a squad-mate replies that he just works here. Blackburn and the squad follow Matkovic into a road-side bazaar, meeting up with Cole, their Commanding Officer (CO), who is standing beside a map of the area. He gives the squad orders to locate a missing unit that had been investigating a possible IED near Spinza Meat Market, telling them to find the squad before the PLR.

After their briefing, Blackburn's squad exits the bazaar, entering a garage. Matkovic kicks open a back door and the squad sprints down an alleyway, regrouping at a door at the end of the alleyway. Another Marine then kicks open that door, before the squad enters the building, with one Marine asking "What is this? A school?", to which Montes replies "Oh, I keep forgetting they don't have schools where you come from".

The Marines then climb up a flight of stairs towards the exit, but a low rumble cuts them off, and the windows start to break. One Marine assumes that other Marines in the area were blowing up high-explosive ammo dumps, while another Marine says its an earthquake, saying that the city is ninety kilometers away from a fault line that causes tremors.

Misfit 1-3 then rallies in an alleyway, closed off by a gateway. The squad takes cover as a PLR technical surges by, ignoring the squad. The unit then crosses a large street, with Blackburn and Matkovic taking a doorway through into a garage. Proceeding towards a parking lot for a large hotel, the squad are unnerved by the lack of civilians in the area.

Ambush in the Car ParkEdit

As Blackburn walks into the parking lot, a hidden enemy sniper shoots Chaffin, one of the Marines in Blackburn's squad. Blackburn then drags Chaffin to safety, and returns to the firefight, helping his fellow Marines by shooting the hostiles hiding behind the cars. After the PLR insurgents retreat, the squad regroups in the car park, but an RPG strikes a white car, with the explosion throwing Blackburn off of his feet.

Misfit 1-3 then advances forward, taking out two RPG gunners in a building overlooking the parking lot, as well as PLR insurgents in the area. Once the PLR retreat, the squad then move back into the garage, where a medic, Doc Holiday, provides medical care for Chaffin. The squad, seeing that everything was fine, move into the building adjacent to the garage, but as they reach the top floor, they are attacked by the sniper, and are forced to sprint past several windows. Montes then sees three PLR insurgents enter the room from a stairwell, and Blackburn helps him gun down the insurgents. Montes then makes note that the insurgents are not native to Iraq, remarking "they weren't speaking Arabic".

After the Marines fight off an ambush inside the building, Blackburn follows the squad onto a rooftop cluttered with generators and air-conditioning units. Recognizing the signature report of a 50-cal (which the sniper uses), and exercising extreme caution, the squad moves behind the machinery towards an open area of the rooftop, with Blackburn staying behind the machines, otherwise the sniper would fatally shoot him. The squad arrives at the final generator, and go prone, hiding behind a wall and moving into firing positions. Matkovic notes that he could use his AT4 rocket launcher, as the sniper was dug into a spider hole in the front of a hotel.

Giving Blackburn the AT4, the squad, on the count of three-two-one, gives Blackburn suppressive fire, pinning down the sniper while Black takes the shot, which rips apart the facade of the hotel. The explosion causes one Marine to remark "Good effect on target" in response. The squad then moves towards the other side of the rooftop, where Blackburn, as the squad's designated marksman, and armed with a Mk11 Mod 0, is told to cover a party extracting Chaffin back towards the staging area. Multiple PLR insurgents attempt to attack the party, from both street-level and from rooftops, but Blackburn's squad holds them off until the extraction team reaches the school alleyway.

After eliminating the sniper, the squad is unable to make its way down through the building they were on, as the PLR were pushing in on them. Using a wooden plank, Matkovic and Campo cross to another rooftop, with Blackburn following. Montes crosses last, and dislodges the plank, deterring pursuit. The squad then makes its way down via the rooftops, and arrives at a large market building beside the hotel.

Entering the building, the squad engages a group of PLR insurgents in the hallway, and find two members of the missing patrol. Confirming both as dead, the squad move out onto an open road, where they see a heavily-damaged HMMWV and the rest of the Viper unit, also dead except for one, who is in critical condition. Heavily exposed, the Marines once again get agitated by their position and the attention of the surrounding crowd.

As the squad continues to check on the members of the patrol, Matkovic notices a red wire leading from under a van into a building by the side of the street. Tasked with tracing the wire, Blackburn crawls through a ventilation shaft and arrives in a basement, where he finds a detonator. Pulling the wire out of the detonator box, Blackburn is ambushed by an insurgent. Fighting in hand-to-hand combat, Blackburn knocks the insurgent out cold, and removes the final wire just before the IED explodes, canceling the detonation.

After defusing the IED, and hearing gunfire outside, Blackburn is tasked to regroup with the Marines outside. As he moves outside into the street, Blackburn and his squad are tasked to clear out a bridge of PLR combatants, while other Marines secure the street-level. Manning an M249, Blackburn is tasked with engaging the PLR as they advance down the street. As he pushes the insurgents back with gunfire, two AH-6 Little Birds arrive and open fire on two PLR technicals. The Marines then pull back as a unit, and Misfit 1-3 holds the flank as the Marines await extraction. Blackburn mans an abandoned technical, using the KORD machine gun to hold off the PLR flankers.

However, as the Marines gain the upper hand, a huge earthquake begins to rip apart the area, tearing up the road and causing a tall building to collapse onto Blackburn and his squad, crashing into an AH-6 during its fall. The screen blacks out, ending the level. 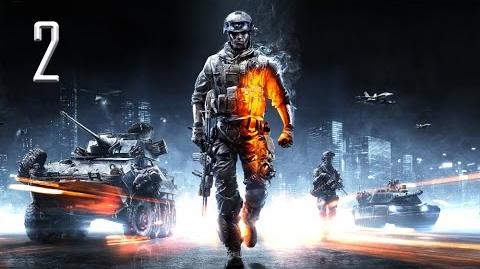 Battlefield 3 Walkthrough - Operation Swordbreaker
Add a photo to this gallery

Kick The Door
Add a photo to this gallery

Retrieved from "https://battlefield.fandom.com/wiki/Operation_Swordbreaker?oldid=372400"
Community content is available under CC-BY-SA unless otherwise noted.