"This class is powerful, but balanced now. The Operator’s extensive selection of carbines and assault rifles gives him a wide engagement range and the medical function of the class is very important for teamwork. However, his limited number of gadgets makes him a little bit more accessible to new players and also limits his flexibility, meaning other classes are needed to support him."

Operator kit is featured in Battlefield Hardline. It fulfills the role of the Assault class from previous installments, having access to Assault rifles and medical equipment, but loses access to offensive equipment like the M320. The kit is equipped with weapons primarily suited for anti-personnel roles, but due to all bullets being capable of damaging light vehicles in Battlefield Hardline, the kit can still handle itself while dealing with street vehicles. All of the Operator's primary weapons are assault rifles and carbines, which have moderate damage, high accuracy, and are easily controllable. The Operator also carries the lower-caliber semi-automatic handguns, which are capable in close quarters due to their magazine capacities and reload speeds. These weapons allow the Operator to function in almost every situation on the Battlefield, the exceptions being extremely long range engagements and dealing with heavily armored Counter Attack Vehicles. All-kit gadgets, such as the Zipline, Grappling Hook, and Gas Mask, are also available to the Operator to further increase the kit's versatility.

All of the class' kit-specific items, however, are medical items to assist the Operator's team as well as the player. The First Aid Pack allows the Operator to heal himself and his teammates, while the kit's Revive syringe can resuscitate downed teammates. For the player's own use, the Operator can also equip the Survivalist syringe, which allows the player to revive themselves (to 10 health) after being downed by explosives or roadkills.

With access to assault rifles and carbines as well as healing equipment, the Operator class can work efficiently with a squad or without one. The kit's weapons are very effective and manageable in firefights, while the Operator's medical gadgets can keep himself and his teammates healthy and able to fight. The kit's only major downfalls are the lack of kit-specific offensive gadgets, its inability to deal with heavy vehicles, and reliance on Enforcers for ammunition, making it dependent on other kits for support. Despite this, the kit remains very well rounded and easy to use effectively.

A group of three Law Enforcement Operators (from the SWAT subfaction).

A group of three Criminals Operators (from the Thieves subfaction). 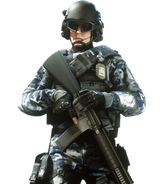 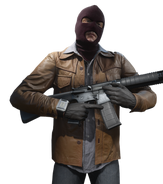 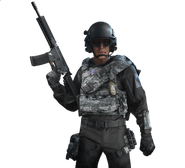 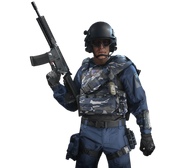 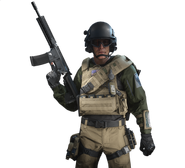 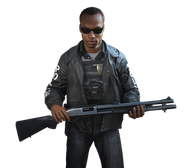 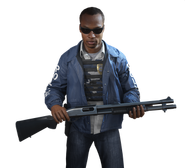 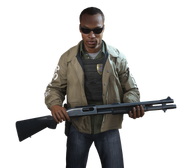 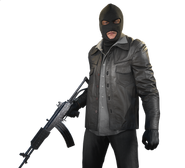 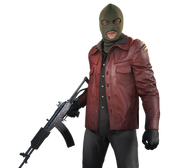 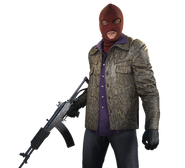 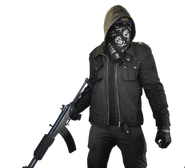 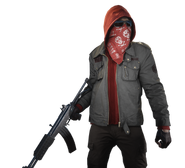 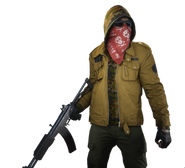