Optics is a Codex Entry featured in Battlefield 1. It is unlocked upon obtaining 50 marksman headshots with the Scout kit. 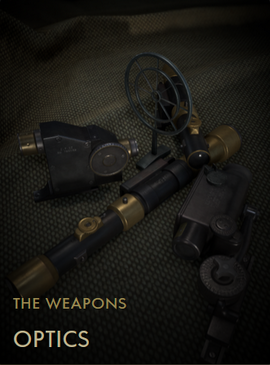 Even 14 years before the war started the reflector or a "reflex" sight was invented. This was a non-magnifying optical sight using a collimator in which allowed the viewer to see an illuminated reticle. But beyond that World War 1 birthed the modern sniper. The battleships with the better optics had an edge in battles over ships with lesser optics. An array of inventions in different optics allowed for soldiers, pilots and gunners to see further than ever before. The demands of an optical glass during the war transformed the entire industry around optical glass from small scale to massive enterprise driven by the needs of the war.

Retrieved from "https://battlefield.fandom.com/wiki/Optics_(Codex_Entry)?oldid=343183"
Community content is available under CC-BY-SA unless otherwise noted.