Battlefield Wiki
Register
Don't have an account?
Sign In
Advertisement
in: Standard, EA, Features of Battlefield 4,
and 3 more

EA acquired the Origin trademark when it purchased Origin Systems in 1992. EA downloader was launched in late 2005, being replaced by EA Link, EA Store, and EA Download Manager over the next six years until it was reopened under the Origin name in 2011. The software was first used to deliver the Battlefield 2: Special Forces expansion pack and was subsequently used for later EA titles, with Battlefield 3 being the first title under the Origin name. 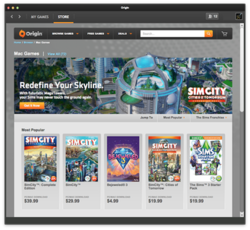 Origin holds social features such as profile management, networking with friends with chat and direct game joining along with an in-game overlay, streaming via TwitchTV and sharing of game library and community integration with networking sites like Facebook, Xbox Live, PlayStation Network, and Nintendo Network. Electronic Arts has stated that it wanted Origin to match Valve's Steam service, Origin's leading competitor, by the end of March 2012, by adding cloud game saves, auto-patching, achievements and rewards, and cross-platform releases. Origin has over 50 million registered users.[1]

The Origin store allows users to browse and purchase digital copies of games from Electronic Arts' catalogs. After purchasing, they are attached to the user's Origin account and are downloaded with the corresponding Origin client. Afterwards, players are guaranteed download availability forever, with no limit to the number of times a game can be downloaded.

The Origin client is self-updating software that allows users to download games, expansion packs, content booster packs and patches from Electronic Arts. It shows the status of components available. The Origin client is designed to be similar to its competitor, Steam. The Origin In Game overlay client can be disabled while playing games.

Electronic Arts also plans to launch the Origin platform for mobile devices (such as iOS devices) and achievements can be synced across both platforms. Scrabble Network will be incorporated into Origin Mobile. These services are free of charge.