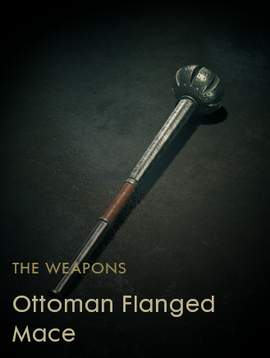 The mace is a brutal bludgeoning weapon that has been used since prehistory, originally being an evolution of the simple club by adding some kind of hard and sharp head to it. As the use of metal armor became more widespread during the Middle Ages, maces were able to inflict crushing damage without needing to penetrate the armor. A further evolution was the flanged mace, whose protruding metal edges could dent or penetrate the armor.

In WW1, virtually all types of ancient melee weapons reappeared to be used in the close quarters fighting of the trenches. Antique weapons were used, and new clubs and maces were constructed with whatever materials were available; like nails or discarded machine parts. Sometimes they would look very much like the medieval maces, with metal flanges or spikes.

Retrieved from "https://battlefield.fandom.com/wiki/Ottoman_Flanged_Mace_(Codex_Entry)?oldid=343244"
Community content is available under CC-BY-SA unless otherwise noted.