The Ottoman Kilij is a Codex Entry featured in Battlefield 1, introduced in the Turning Tides expansion. It is unlocked upon acquiring ten kills with the Ottoman Kilij. 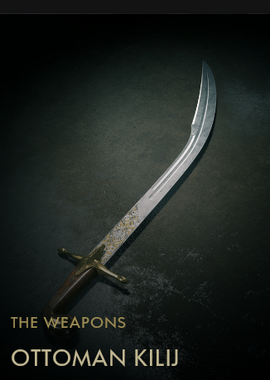 The Kilij was the traditional saber of the Turks, recognizable from the late 15th century. It had a curved blade with a single edge and a flaring tip called a yalman which increased the swords cutting power, and it was typically made of high quality steel and adorned with engravings.

The Kilij was primarily a slashing weapon, although the curved blade and sharp tip allowed it to reach around shields. During the Middle Ages, the Turkish Kilij spread to other cultures of the Middle East, and it continued to be used well into the 20th century. Although the Ottomans began to abandon the Kilij for western type sabers as the army modernized in the early 1800's, it kept on being carried by civillians as part of their traditional dress. Around the turn of the 20th century the Kilij returned with Ottoman guards and high ranking officers as a nationalistic symbol.

Retrieved from "https://battlefield.fandom.com/wiki/Ottoman_Kilij_(Codex_Entry)?oldid=358253"
Community content is available under CC-BY-SA unless otherwise noted.