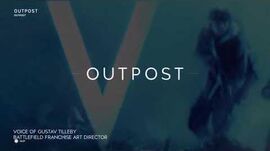 Outpost is a gamemode featured in Battlefield V, introduced in the third Tides of War chapter, Trial By Fire on June 13, 2019. The gamemode pits two 32 players teams against one another as they try to construct radio towers and obtain recruits. [1]

Each map has objective locations where radio towers can be built. They are constructed by players using the Toolbox, like any other Fortification. Once a tower has been constructed, it will award victory points, known as Recruits, every 70 seconds it remains standing. Using Fortifications, towers may then be upgraded two more times which increases the number of recruits obtained per tick from one to a maximum of three. After building is finished, there is a period of about 20 seconds before the next tier of structure can be built. Each level takes longer to upgrade than the last, although construction can be sped up by using the Support class. When standing near the objective, players are awarded Requisition Points for Squad Reinforcements whenever the tower produces recruits, with the point gain multiplier increased for each member of the squad nearby - thus incentivizing organized defense of the towers.

To stop recruiting efforts of the enemy team, players must destroy their towers. This can be done with explosives, which include gadgets, tank shells or artillery strikes. The amount of health of the tower is dependent on its upgrade level, as dealing enough damage to destroy a level 1 tower will only knock a level 3 tower down to level 2.

Another method of destruction is by planting Bombs on the tower which explode after some time, with the upgrade level of the tower determining the bomb fuse length - 30 seconds for level 1, 45 for level 2 and 60 for level 3. In this way, towers can be completely destroyed regardless of level, although the bombs can be defused by players on the opposing team. Once an enemy tower has been destroyed, a friendly tower can be built in its place.

The first team to reach the maximum recruits will be declared the winner of a match, a number dependent on the number of radio towers on the map, with 25 recruits per tower. Teams will draw if each side have the same number of recruits when time runs out. Killing players does not reduce a team's recruit count.

Initially, teams only have access to light transport vehicles such as halftracks from their deployment area. As the team accrues recruit points, they gain access to corresponding increases in tank and aircraft spawns. When one of the teams reaches 50% of the recruit limit, both teams get access to Tanks. Aircraft are unlocked at 75%, although Bomber aircraft are prevented from spawning in this mode.

The objectives in Outpost do not provide a spawn point when captured, which means players can only spawn in on their HQ, on Squadmates, or Spawn Beacon.[2]

Originally, Outpost was only available on Arras and Mercury. Aerodrome, Iwo Jima and Pacific Storm gained support for the upgrade during Week 11 of War in the Pacific, taking place between the 9th and 16th January 2020. Outpost became playable on Twisted Steel on May 14th, 2020.