The P08 Pistol is a Codex Entry featured in Battlefield 1. It is unlocked upon obtaining ten kills with the P08 Pistol 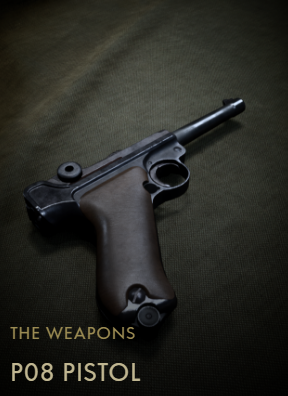 One of the most famous German firearms ever, the P08 was an evolution of the C-93 pistol from 1893. The C-93 was accurate and powerful, but had awkward ergonomics and was expensive to manufacture. After the designer of the C-93 refused to make the requested design changes to the gun, the job was given to his former assistant.

The C-93 used a complex toggle lock action that was a big part of the pistol's problems so it was simplified and the weapon was made more compact and given better ergonomics. This design, called the Parabellum Pistol, was patented in 1898.

The Swiss were the first to purchase the Parabellum in 1900, and many nations bought it before WW1. Even the USA considered the pistol before they settled on the M1911, but it was when the German army adopted the Parabellum in 1908 to replace the Reichsrevolver that it got the P08 designation. It was the standard issue sidearm of German forces through WW1 until 1938, with two million pistols produced by 1942.

The P08 received a reputation for durability and accuracy although its mechanism was still highly complex and expensive, but the build quality of early P08s was so good that pistols which saw service in WW1 lasted well through WW2 and beyond. Like with many other pistols in WW1, there were experiments with converting the P08 into a fully automatic machine pistol, but it had an excessive rate of fire and the idea was abandoned.

Retrieved from "https://battlefield.fandom.com/wiki/P08_Pistol_(Codex_Entry)?oldid=343166"
Community content is available under CC-BY-SA unless otherwise noted.