Although the M9 was instead adopted for the US military, the P226 is the service sidearm of the US Navy SEALs. The P226, as well as several other members of the P220 family, are also used as service handguns in law enforcement around the world.

In Battlefield Play4Free, the P226 is a purchasable semi-automatic sidearm available to use by all soldier kits. It was added in update 1.05.. It has many similarities to the Elite's MP-443, like damage and accuracy. However, its recoil is the lowest amongst all pistols in Battlefield Play4free. This bonus makes it a wonderful choice for Recon soldiers that are looking for a great pistol that can assist them in close to medium range combat. However, the weapon comes at a high cost of up to 3749

The P226 at Sharqi in Battlefield Play4Free.

WEEKDAY WEAPON SALE: P226
Add a photo to this gallery

The P226 is featured in Battlefield 4.

It is available as the default sidearm for all players. Its performance is very balanced, with average damage, the same as the M9 and MP-443. It has low vertical kick, but significant side-to-side recoil.

With its well-rounded stats, any attachment can be useful, such as the laser sight or suppressor. As its vertical recoil is already low, the Muzzle Brake is unnecessary. The compensator may be more useful, as it reduces the horizontal recoil. 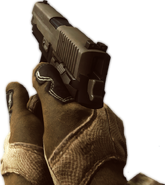 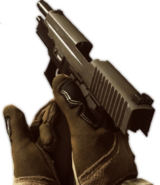 26 + 13 rounds (SP)
"Ergonomics and balance make this pistol easy to handle. High damage and stability make this weapon a great choice for accuracy during medium range and close range combat."

The P226 is a sidearm featured in Battlefield Hardline.

It is a buyable sidearm for the Law Enforcement Operator. It has higher damage than the default 92FS, but a slightly smaller magazine capacity.

Retrieved from "https://battlefield.fandom.com/wiki/P226?oldid=362864"
Community content is available under CC-BY-SA unless otherwise noted.