The P90 is a weapon featured in Battlefield 4.

The P90 is Hannah's primary weapon and is carried by her throughout the campaign. The P90 can be found in South China Sea by the player as a Collectible, to the West of hatch G-46 in the red-lit room. It is equipped with a HOLO, Heavy Barrel and Tri-Beam Laser. It sports an Atomic Urban finish.

Completion of the Peace Maker assignment in the singleplayer campaign will unlock the weapon for use in multiplayer.

Compared to its counterpart from Battlefield 3, the P90 performs almost identically but with a higher recoil, which limits it use to medium range if the player is unable to control the weapon's high fire rate along with the muzzle climb.

In the hands of a skilled user however, the P90 is a versatile weapon, ideal for close-quarters combat or when combating hostiles when repairing a friendly vehicle. 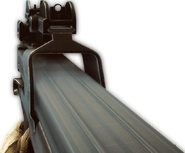 The US Engineer (left) holding the P90.