The PDR (Personal Defense Rifle) is a compact, bullpup-style 5.56x45mm carbine developed by Magpul Industries. Although the project was abandoned, it has garnered some attention, largely due to its "futuristic" appearance. The system consists of a gas-operated bullpup that was intended to replace some submachine guns, M9 pistols and M4 Carbines in an ultra-compact firearm.

It is known in the Battlefield series as the Personal Defense Weapon-Rifle (PDW-R) and appears as the PDR-C variant.

Battlefield Play4Free Comparison Tools
"This state of the art Personal Defense Weapon uses standard NATO 5.56 rounds, giving it good damage delivery over all ranges and a long reach for a SMG-type gun, especially when fired zoomed."

In Battlefield Play4Free, the PDW-R is available as a purchasable weapon for the Engineer Kit. It has average stopping power at close range, but it suffers at long-range combat, taking up to 9 shots to kill a foe at full health.

The PDW-R as it appears in-game

http://symthic.com/?s=bf3
http://www.ign.com/wikis/battlefield-3/PDW-R
"Developed as a Personal Defense Weapon, the PDW-R differs from most other PDW concepts by utilizing the standard 5.56mm NATO rounds of the M16 or M4. This allows the PDW-R to share magazines and supply lines with standard troops while its short length and bullpup configuration allow the PDW-R to be easily operated in CQB. Though it lacks the accuracy of a rifle, the PDW-R has a greater punch at longer ranges than other PDWs."

The PDW-R was first seen in the four-page fact sheet from EA.

It is used by enemies during the campaign in Kaffarov, in the dark room prior to the target range, equipped with various optics and the Tactical Flashlight.

It appears during the Co-Op campaign in Hit and Run.

In multiplayer, the PDW-R is an all kit weapon unlocked at level 32, belonging to the PDW section. The weapon possesses a moderate rate of fire and kick, with the same damage figures as most carbines (25-14.3). The PDW-R also is the only PDW to benefit from being a bullpup weapon which increases its hip-fire accuracy and movement speed while aiming down the sights. The iron sights are also very clear and easy to use, meaning that players just learning to use the PDW-R should have little to no trouble with target acquisition. The weapon's magazine holds 20+1 rounds. This can be upgraded by utilizing the Extended Magazine attachment, which brings the ammo count to 30+1.

While the PDW-R does hold many similar traits to carbines (damage figure, accuracy and hipfire), it does come up short compared to carbines in terms of having a comparatively slow bullet velocity, as well as not being able to equip the heavy barrel. As such, it shouldn't be considered an actual improvement over many carbines available to the engineer class. It does however, like the AS VAL, offer a more versatile play-style than standard PDWs to the recon and support class that utilize more cumbersome weapons.

symthic.com
The PDW-R appears in Battlefield 4 as a PDW for the Engineer class. It now uses 30-round magazines by default.

The PDW-R is unlocked by completing the Gold assignment in Suez by scoring 5,000 points. It is equipped with a HOLO, Laser/Light Combo and Heavy Barrel. It sports an ERDL Naval finish.

Unique among PDWs, it has the same damage and range as the average Carbine, along with a moderate recoil and rate of fire.

It does the most damage at range in its class, tied with the UMP-45. However, since it has no foregrip slot, it automatically has the ergo/vertical grip multiplier, while the UMP-45 and Carbines can use all variants of grips. The PDW-R also has the advantage of high mobility and hipfire accuracy, because of its bullpup layout.

Overall, the PDW-R gives the player a similar option to Carbines, but trading increased tactical options for better close-range handling.

The PDW-R in first person 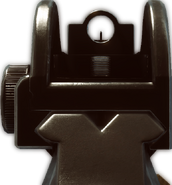 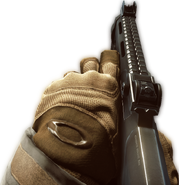 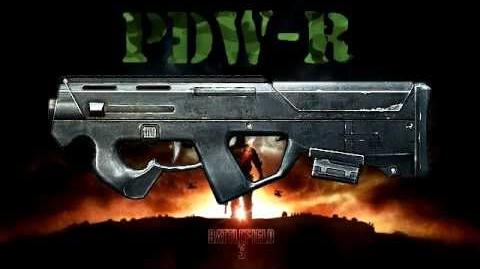