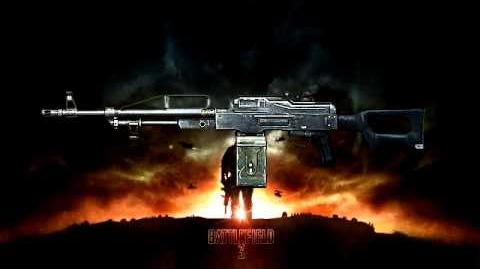 The PKP Pecheneg is a Light Machine gun featured in Battlefield 4. It is almost identical to its iteration in Battlefield 3, with the main difference being its now-correct reload animation, using the charging handle at the end. Otherwise, there is no appreciable difference other than the attachments which can be applied.

The PKP is the third LMG to be unlocked. Filling the role of the heavy controllable LMG, the Pecheneg is quite powerful, allowing its user to win any close to mid range argument with little effort. 4x magnification does to this MG no favour, due to the powerful, yet quite controllable, vertical recoil. The sights are sharp but not restricting. Red dot and reflex sights can provide even more accuracy as well as a bigger field of view when Aiming Down the weapon's Sights. Suppressors are somewhat unnecessary, due to the fact that it reduces its already low Bullet Velocity, making it harder for the user to engage in accurate ranged combat. Compensators and Muzzle brakes are not necessary, although, the former favours CQ Combat, while the latter makes the recoil almost 55% on alll directions. A Heavy Barrel reduces the overall spread pattern, adding a decent 33% vertical recoil on the side. A flash hider is the ideal barrel modification for the user who does not wish to alter the weapon's recoil pattern. Overall, it outpreforms the M240B in terms of recoil, reload speed and accuracy, sacrificing damage and RoF. Certainly capable of winning close to mid range arguments, although lacking a bit in long and very close range combat, its the ideal weapon for those who like to switch between an offensive and a defensive playstyle on the fly. 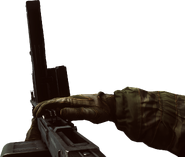 Retrieved from "https://battlefield.fandom.com/wiki/PKP_Pecheneg?oldid=369139"
Community content is available under CC-BY-SA unless otherwise noted.