The PP-2000 (Russian: ПП-2000, Pistolet Pulemet 2000; English: Machine Pistol 2000) is a Russian machine pistol designed by the KBP Instrument Design Bureau and is classified as a Personal Defense Weapon (PDW). It fires the 9x19mm Parabellum round at 600-800 rounds per minute. It was first introduced to the public in 2004.

Battlefield: Bad Company Official Prima Guide
"Ultra modern Russian submachine gun, first shown to the public in 2004. Used by Russian police and security forces and claimed to be superior to many foreign competitors. "

The PP2000 is a submachine gun featured in Battlefield: Bad Company.

The PP2000 can be found on the mission Par for the Course as a collectible.

The PP2000 is issued to the Specialist kit as an unlockable, costing one unlock point. It has a 60-round magazine and the fastest rate of fire (along with the MG3) of all guns in-game at 1000 rounds per minute. This makes it extremely well suited to close quarters, but the rate of fire coupled with its lower accuracy makes it a poor choice for longer range encounters.

The PP2000 in Battlefield: Bad Company in the multiplayer map Ascension in Conquest mode

The PP2000 being aimed
Add a photo to this gallery

"This modern submachine gun has the unique ability to store a 44 round magazine at the rear where it also functions as a stock. Designed for personal defense and close quarter combat, it is often used by SWAT."

The PP-2000 Avtomat is a weapon featured in Battlefield: Bad Company 2. It is the sixth submachine gun issued to the Engineer kit requiring 32,000 points to unlock. It can be equipped with a Red Dot Sight or a 4X Rifle Scope. It has the highest rate of fire of any weapon in the game, tied with the Medic's MG3. It has a comparatively large magazine of 40 rounds in-game. At closer ranges, the PP-2000 is very effective due to its extremely high rate of fire. Per bullet, the PP-2000 does less damage than other weapons of the same class, but its high rate of fire give it a higher damage per second than any other submachine gun. The PP-2000 only lets the user carry two magazines in reserve, however, equipping the Ammo Hip Bandolier specialization can solve that problem.

PP-2000's in-game description and stats evaluation.
Add a photo to this gallery

The PP-2000 Avtomat at Nelson Bay in Squad Deathmatch.

The PP-2000 Avtomat at Valparaiso in Rush. 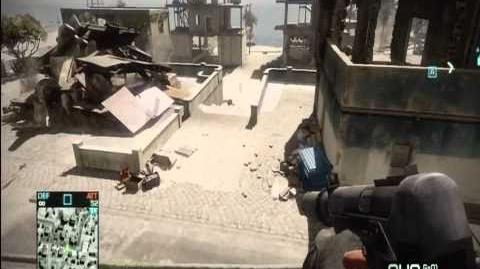 PP-2000 Avtomat
Gameplay with the PP-2000 Avtomat in Battlefield: Bad Company 2 at Arica Harbor in Rush mode.
Add a photo to this gallery

Battlefield Play4Free Comparison Tools
"This modern submachine gun has the unique ability to store a 44 round magazine at the rear where it also functions as a stock. Designed for personal defense and close quarter combat, it's often used by SWAT."

The PP-2000 is a weapon featured in Battlefield Play4Free as the default submachine gun issued to the Engineer kit. The weapon, like most of the submachine guns, has very low recoil and performs very well in close range. It also has the quickest reload time.

The PP-2000 in Battlefield Play4Free on Sharqi

PP-2000 with the Holographic Sight attached

Looking down the Holographic Sight

http://symthic.com/?s=bf3
http://www.ign.com/wikis/battlefield-3/PP-2000
"Though chambered in the standard 9x19mm caliber, the PP-2000 is designed to use Russian overpressure rounds at high velocity to penetrate body armor. The high muzzle velocity of the PP-2000 gives it a flatter trajectory than other 9mm weapons, and its compact size make it ideal as a Personal Defense Weapon. When equipped with the 40 round extended magazine the PP-2000 also functions admirably in a CQB assault role."

The PP-2000 is featured in the mission Kaffarov before Dima picks up his weapons out of the tube.

The PP-2000 is the third all-kit weapon to be unlocked, after the G17C and the 870MCS. It has 20+1 rounds in a magazine (40+1 with the Extended Magazine Attachment), and a slower rate of fire than the counterpart in the previous Bad Company series, as it fires at 650 rpm and its low firerate makes it more controllable than other PDWs at medium range. Unlike most PDWs, the damage drop off starts at 12 meters rather than at the usual 8 meters, effectively letting it kill in 4 hits (excluding head and leg hits) up to 12 meters. Overall, this weapon is effective, especially with Extended Magazines as the moderate damage, very low recoil and good hipfire make it versatile for most close to medium range engagements, and while the low rate of fire reduces its time-to-kill and effectiveness in close quarters against other PDWs, it helps reduce ammo consumption compared to most other PDWs with high fire rates.

It should also be noted, like other PDWs and Pistols, that the PP-2000 has moderately low bullet velocity.

The PP-2000 in the Campaign mission Kaffarov. 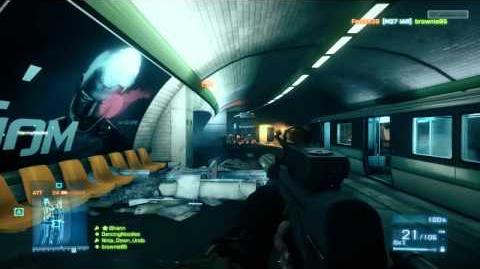 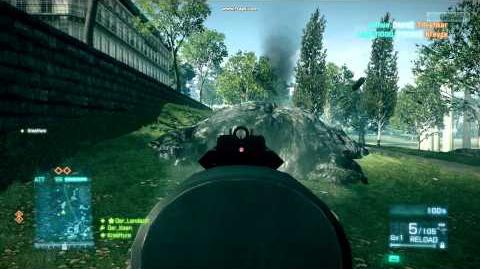 Battlefield 3 (Бета) - Стрельба из ПП-2000
Quick video, showcasing the handling of the PP-2000 in Battlefield 3.
Add a photo to this gallery

The PP-2000 is a weapon featured in Battlefield 4.

The PP-2000 is the standard PDW of the RGF. It is equipped with a Kobra and Laser Sight. It sports a Worm Woodland finish.

The PP-2000 is unlocked after scoring 10,000 points with PDWs. Although the RPM is relatively low compared to weapons like the P90, it has higher damage per shot and its recoil is much more controllable. The larger magazine capacity than many other PDWs also helps make up for the lower fire rate.

The PP-2000 in first person, equipped with a Coyote RDS.
Add a photo to this gallery

Retrieved from "https://battlefield.fandom.com/wiki/PP-2000?oldid=363084"
Community content is available under CC-BY-SA unless otherwise noted.