watch 03:41
Wiki Targeted (Games)
Do you like this video?
Play Sound

The PPSh (Russian: Pistolet-Pulemyot Shpagina; English: Shpagin machine pistol), more specifically the PPSh-41, is a Soviet submachine gun designed by Georgi Shpagin in 1941. The PPSh was designed to be a cheap and effective replacement for the PPD-40. It was mass-produced with 6 million units produced by the end of World War II. It proved to have unmatched close range firepower with its 900 rounds per minute rate of fire and 7.62x25mm cartridges typically placed in a 71-round drum magazine. After the war, it became obsolete in Soviet Russia and was sold to other Soviet allies such as the People's Republic of China, North Korea and North Vietnam.

[1]
"Russian made submachine gun designed with simplicity and mass production in mind. Almost 6 million PPSh machine pistols have been manufactured and users commend its low recoil and close range firepower."

In Battlefield: Bad Company 2: Vietnam, the PPSh is a submachine gun issued to the Engineer kit. It has a 25-round magazine and generally open iron sights. It has a notably lower rate of fire than the M10 or UZI, but it has considerably higher damage and recoil.

It is near identical to the UMP-45 in base game, as it has a 25-round magazine, moderate rate of fire and upward recoil, high damage and same reload time and rate of fire, but the PPSh does considerably more damage.

The render of the PPSh.

Reloading.
Add a photo to this gallery 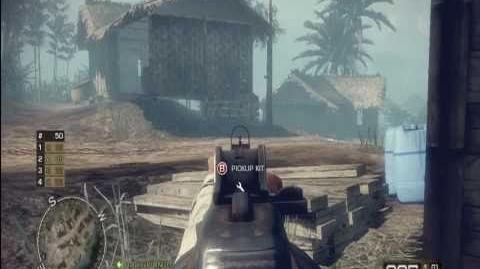 PPSH
Gameplay with the PPSh in Battlefield: Bad Company 2: Vietnam at Cao Son Temple and Operation Hastings in Conquest mode, and Vantage Point in Squad Deathmatch mode
Add a photo to this gallery

Retrieved from "https://battlefield.fandom.com/wiki/PPSh?oldid=363049"
Community content is available under CC-BY-SA unless otherwise noted.