Panama Canal is a map featured in Battlefield: Bad Company 2 and has the highest number of Conquest bases in the game.

"Units in contact are being rotated out as a result of combat fatigue. Weeks of fighting have left the harbor in ruins and the surrounding area littered with destroyed equipment. Armored movement is hampered and deadly kill zones mare the ground. U.S Forces as staging an assault of the industrialize port with the objective to seize, retain and exploit the area. Control of the canal will allow larger-scale Strategic Operations along the South West Pacific coast."

Panama Canal is a 81 km long canal in Central America. It connects the Caribbean Sea to the Pacific Ocean and effectively splits the continents of North and South America.

When Russia initially invaded South America, they knew that the primary route of counter-attack would be through Panama: a US invasion of South America from the north.

This map becomes very vehicle-centric due to the amount of tanks available, despite the few areas vehicles can travel through. This makes Anti-Tank Mines very useful on this map as they can be concealed by the debris scattered about the map, especially on the way from Delta to Charlie.

There are six bases at Panama Canal four of which can be captured. 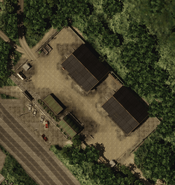 The US Deployment is the starting base for the US Forces. One M1A2 Abrams, one M3A3 Bradley and two Quad Bikes spawn here. US Forces can either head directly to Alpha or take the dirt road along the highway to Bravo. 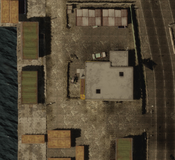 The Comm Center is the nearest control point to the US Deployment; it has one M3A3 Bradley that spawns next to the barracks at the rear and two XM312 heavy machine guns - one next to the flag and one on the roof of the building. There is a walkway along the dry-dock that the destroyed tanker is in that leads to Charlie nearby, and the road ahead leads up to Bravo. 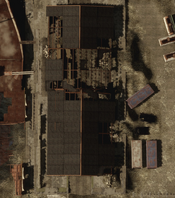 The Warehouse control point is nearby the front of the destroyed ship. It can be taken easily by both the US and the Russians, as both factions have a road leading up to Bravo. With this, many first confrontations will occur here. After capturing Bravo, the US Forces can either move towards Charlie through the dry dock, or towards Delta through the road. The RU Forces can move through Bravo towards Alpha. 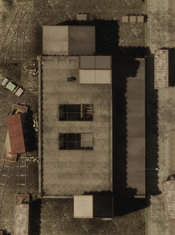 The Factory control point houses a UAV-1 on the roof with large metal walls guarding it from snipers; however, these walls can be destroyed by rockets or tank shells. The US Forces can head to Charlie either through the walkway on the dry-dock near Alpha or across the destroyed ship. The RU Forces have a road leading up to Charlie from Delta that is covered in debris, making tanks take a while to pass it.

The Train Yard is the nearest control point to the Russians. It spawns one BMD-3 near the trains and two KORD heavy machine guns - one next to the factory building, and one on the other side next to the warehouses. In back, there is a road leading to Bravo. The US Forces can reach Delta by taking the road near Bravo or through Charlie. 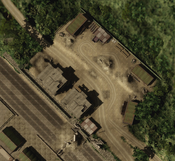 The RU Deployment is the starting base for the RU Forces. One T-90, one BMD-3 and two Quad Bikes spawn here. There is a road leading to Delta and another one leading to Bravo along the highway wall.

As part of VIP Map Pack 6, Panama Canal was refitted to play in Squad Deathmatch mode. The map is sectioned off to only include the area surrounding the stern of the destroyed ship trapped inside the canal lock. The area past the bow of the ship is out of bounds; the wooded area just beyond the highway is out of bounds as well.

An M3A3 Bradley spawns near the Warehouse, underneath the construction building located between the Warehouse entrance and the highway.

The Squad Rush variant has Flag B as the Attackers Deployment, with the M-COM at a nearby structure. The second M-COM is located at Flag A.

RU Su-25 Frogfoots bomb the US Deployment and US Forces are driven out of the area Panama Canal and the assault is a failure.

2 US F/A-18 Hornets bomb the RU Deployment and RU Forces are driven out of the Canal allowing larger-scale Strategic Operations along the South West Pacific coast for the US. 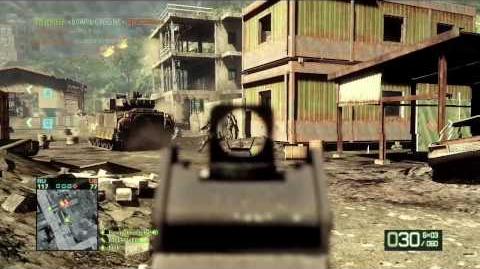